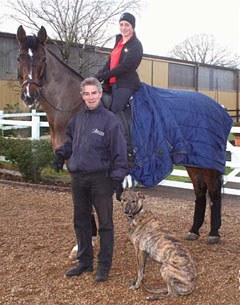 Respect that leads on to trust, discipline that enables them to allow their horses to have fun, these are the key themes in the training of the horses by the extraordinarily successful Eilberg family. As I talked to the four very strong characters, full of ideas and eager to express them in a very articulate manner, it struck me that this was how they themselves operated too. Ferdi and Geri and their children Maria and Michael kept up a flow of conversation in which they all had their say, nobody argued, each reinforced or added to the points made; there were no silences, no talking over others, and lots of laughter; impulsion was maintained at all times. Ferdi, a British European team silver medallist, winner at Aachen and multi national champion said that they did have: “quite exciting deep discussions but most of the time we are so busy there is no time to get into conflict.”

Michael who won his first national title this year did add: “We do have a system that when father talks we all have to sit up and listen. When he is not here it’s down to the next person!”

Maria, a Young Rider team medallist, the reserve for this year’s Olympic team and the first Eilberg to win the Grand Prix national title is not so dominant as the two male competitors, but still gets her point across clearly. Geri, Ferdi’s wife of 30 years has ridden in grand prix but her focus has been on feeding, supporting and co-ordinator/manager to her family.

Maria and Michael have developed as dressage riders in very different ways. Maria turned to it at a very early age when her pony was not sound enough for eventing. Michael has only just come round to it and as his father said: “His mind was too wild for dressage so he went jumping.” Geri added: “It gives you a good feel for natural balance to go jumping and then you do not mind if young horses spook or buck.” However even though he was not doing competitive dressage as Ferdi said: “He would have been out of place here if he did not get his pony on the bit.” Michael added: “I have been in the right environment from the start. The dressage was natural for me and I did not have to think about it.” That is the key advantage to those like the Eilbergs, the Bechtolsheimers and Woodheads that are born into a family with a passion for dressage, they learn by imitating rather than being told.

Adapting to the Talent

Another Eilberg philosophy is to develop the talents whatever they might be, hence Michael’s Torino jumped successfully for two seasons but was quickly converted to dressage as he got stronger and his paces developed. The Eilbergs like to jump all their young horses and often to start them in the jumping arena rather than asking for a test. Ferdi explained: “ We like to get them into the atmosphere of a show without having to impose too much discipline and composure. They can let their spirit out in the jumping. You do not have to make such an issue of any naughtiness, like you have to in dressage. They can express themselves in the manner of a young horse. There is a drawback as Michael pointed out: “Riders have to be good enough to cope.” But no problem amongst the Eilbergs, Michael is fearless and a well trained show jumper.

Nowadays however it is the flat work that dominates at their Pink Green Farm and a key element of this is feedback both from the horse and from the ground. Ferdi said: “More and more I am taking opinions from Maria and Michael. I am quite open, all for what works and gives me the right results. With Maria and Michael it is an interaction, when they ride I give my opinion and vice versa. It helps to pick up problems early on. Nothing gets swept under the carpet.”

Ferdi admitted that there used to be clashes and Geri said: “When Michael started riding nobody could tell him anything. He would not go on a leading rein so he had to learn by experience. He would leave his pony "parked" in the back hall in the house! Maria had rather a different attitude to her brother: ‘I like to have someone with me and helping me’ - she learnt by listening and enjoyed instruction. Ferdi said; “We have been working together intensively for quite a few years now.”

But the important person in the early years was Geri. “Ferdi was busy and he left it to me to take them to the Pony Club. For me the main thing was for them to have fun, jump and enjoy their ponies. The Pony Club formed them in the early stages.” But Maria was single minded and very determined. She once went up to her father and said: “Do I have to book a lesson to work with you!” Ferdi remembers too that having watched him working closely she started to give her Shetland pony in-hand work. At the same age Michael gained experience hunting and generally being rather a cowboy on his rather cheeky 12.2hh.

As he got older it was Geri who took him off to the jumping shows. Geri said: “Often I would be driving in with Michael as Ferdi was going out with Maria. We hardly saw each other!” Michael went on to work with Tim Stockdale and rode 10 or 12 horses a day. He pointed out: “It is very important to sit on good horses, to learn how to be sensitive. But it is also important to ride horses that do not always do what is wanted. You have got to get to know whether to reprimand or give them more confidence.” And that is when Ferdi made that important statement: “You have to get them to respect you enough that they can learn to trust you.”

Michael had his version: “There are two sides to performing well – a mixture of fun so the horse enjoys his work and of discipline so they know what to do. I grew up seeing the discipline in Ferdi’s work.”

There is another brother: Luke. He was away at Staffordshire University studying sports technology when I visited. He gave up riding competitively at 16 wanting more time for other sporting interests but as Maria pointed out: “He understands horses and knows what to do on the yard so is always being roped in to help.”

A Wide Range of Skills

The Eilberg yard reflects the pride, adaptability, and discipline that they apply when riding their horses. Over 25 years they have converted what was a scrap metal yard into a highly effective and smart equestrian centre. Ferdi is a DIY husband having completed much of the carpentry work. Also, many of the ideas that help the smooth and efficient running of the centre are his.

His latest pride and joy is a system of collecting the manure which reduces the effort and time involved, and makes it easier to maintain the pristine conditions of the centre. The inventiveness and attention to detail which are features of his training are apparent everywhere.

A Neglected Source of Horsepower

A lean-to with sand pens where youngstock can live and play is in the making. Ferdi knows that to keep his talented offspring well mounted he has to find horses when they are cheaper and therefore younger. He is going to breed some too, but he is also one of the first in Britain to identify an important source of horsepower – stock bred at British studs. The Woodlander stud supplied Michael’s Shearwater Champion "Woodlander Dornroschen" and Ferdi said: “The studs can get their stock used to saddles, to hacking out, but they cannot produce them properly. The most important time for a horse is between four and six years because that is when you lay the foundations of contact, attitude, confidence in their work. If that goes wrong they can learn the tricks but it leaves them with a basic deficiency.

“Every young horse has a natural forte and deficiency. It is important to pick up early on the deficiencies and bring them up to scratch. Too many in Britain work on the talents and then that deficiency leads to the base falling out.” That approach has meant they have an extraordinarily high success rate in getting their horses to the higher levels of dressage and jumping.

They do not do this in order to make a profit out of selling for Geri said: “We have had to sell some horses along the way but many are here for life.” Their financial gains come mainly from training and Ferdi has just taken over the role of trainer to the Irish eventers, the British Dressage Under 21s, - more credits to be added to those of private trainer to Olympic riders and national trainer to the eventers, paralympics and dressage.

He wants to offer our young riders more of what has become available with World Class – physios, health, sports psychology, and to go on home visits. “I will try my best to get a real team effort going, to develop a good atmosphere and harmony within the team.” Just as he has done with his family.