Euro-Tour of Duty for Leslie Morse and Tip Top 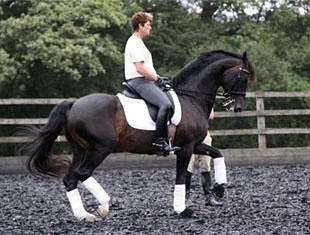 American Grand Prix rider Leslie Morse has traveled to Europe with her number one Grand Prix horse Tip Top for a European summer Tour of Duty. In pursuit of fine-tuning her skills, Morse returned to legendary dressage rider and trainer Kyra Kyrklund and her husband Richard White for the training of horse and rider, body and soul.

The pair left their home in Beverly Hills, CA, on June 11 heading to the East Coast to became the new American Grand Prix Dressage Champions at the 2009 U.S. Dressage Championships held in Gladstone, NJ. They stayed ten days at Betsy Steiner's to unwind after the nationals. "It was a complete pleasure to be with friends," Morse admitted. "It is an advantage of flying directly from New York to England because it shortens our trip by half." On 6 July 2009, Leslie and Tip Top arrived at Kyra Kyrklund's Snow Hill Farm in Great Britain.

Training with Kyra have been instrumental in Morse's dressage career. Not only did Leslie discover the Swedish warmblood licensed stallion Tip Top (by Master) at Kyra's yard, but the Finnish trainer has helped and trained the pair over the years to grow into a real combination. This summer at Kyra's Morse was able to show off the progress she had made in the U.S. and got the opportunity to work more on the details. 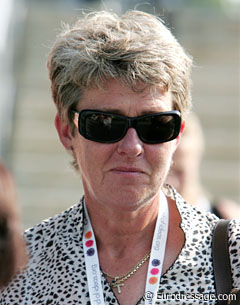 "I've learnt so much again in such a short time," she said. "Most importantly is the team work that Kyra and Richard share. They are two brilliant minds working together towards a common goal with me and Tip Tip: to help develop our long term growth."

Morse praises the entirety of Kyra and Richard's training system. "All along Kyra watches, discusses and adds her insight. It's a complete training of horse and rider. It goes from everything, such as Tip Top's balance, his straightness to the importance of my riding; my focus and trust in the horse. Together we are putting the pieces together for the competition and make sure I have a clear idea of what I need to work on when I go home. I'm lucky to have the experienced eyes of my friend Marie Meyers at home, but home training is much different from show coaching."

For Hickstead Kyra's main focus was to help Leslie get in the zone. "I had to stay clear in riding forward and uphill.  Richard is focused on how my body influences every step my horse takes. He zones in on getting me to feel the difference between good or bad. He studies the movement of both of us. I'm just so lucky to be able to train with both, it is a complete package." 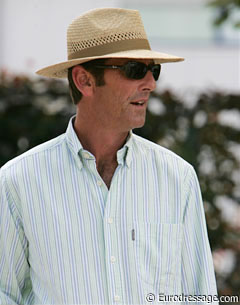 "Tip Top was extremely happy and feeling strong and fresh in Hickstead," Morse stated. "He knew he was there for an important competition. When we entered the arena his concentration was on his job. In such a big atmosphere I was thrilled with how bold Tip Top has become. In the Grand Prix we had a few small error that proved to be very costly. The zig zag and a short change behind in the one tempi's. Both are x 2 so that dropped the score. Otherwise we showed a very very good test."

Winning the WDM Grand Prix Special was a career highlight as they beat an impressive field of competitors. "I was thrilled," said Morse. "I so looked forward to the Special and Tip Top was fabulous. He certainly showed how fit he was and not feeling any weariness from his one and a half month traveling! Tip Top arose to this difficult test. He was truly supple and elastic while showing his power. I was entirely focused and riding for the moment that I forgot the canter half passes, but that did not rattle his concentration. He continued on and received 9's for the 2 tempi's. I was mad at myself for that mistake, but ecstatic about my horse's performance."

After Hickstead they crossed the channel to venture to Germany. At the CDI Verden, the Grand Prix was a bit rocky due to some rider mistakes, but Morse recovered quickly in the Special to land fourth place. Morse and Tip Top have proven that they can stand their own even against the world's best European riders. 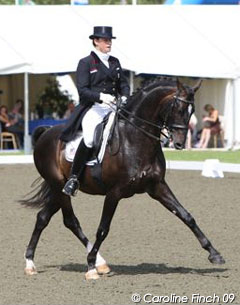 "Tip Top warmed up extremely well but ran out of gas," Morse admitted. " It was an important lesson I learned about traveling with Tip Top for our future. After 30 days abroad jet lag had set in. We had a wonderful warm up but as I entered the arena the jet lag and time difference had finally showed up. Tip Tip was tired. With everyone's support I quickly made adjustments for next day's warm up, which proved to work in our favor."

Leslie is thrilled about the progress her dark bay stallion has made over the years. "Tip Top has developed into everything I had hoped he would be," she confessed. "He has increased in power, quickness, character and at the same time kept his natural rhythm and elastic beauty. We all know how hard this is to achieve!"

"Competing internationally means not only riding but also managing your horse's care in new surroundings from little things as "where do you purchase carrots" to figuring out how to have ice for your horse's legs. This sometimes is not as easy as it sounds and can be very different all over the world," Morse explained. "Managing Tip Top's stress along with mine and helping my groom Dorte were also very important. Having a long term trainer such as Kyra and Richard helped a great deal. Everything from weather changes, feed changes, time changes and so many other differences to being at home are things you only learn to deal with by living them. At all competitions the show management was extremely helpful and welcoming which played an important role in our success." 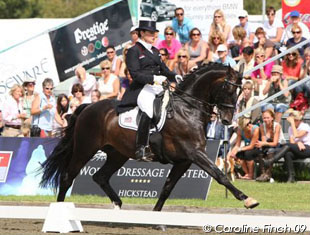 Morse is now back in California with some brushed up training skills. "I used this trip as a barometer. I learned a great deal so I am confident that will help me for next year's World Equestrian Games and our other international competitions. I am grateful to the USEF and all the people who support USA dressage. Their grant enabled Tip Top and I to travel and continue our growth."

At Morse's California home the stars of the stable are of course Grand Prix horses and breeding stallions Tip Tip and Kingston, but Morse has 18 horses in total to take care of. They are of all ages, going from foals to youngsters. "All of them are either sired by Tip Top or Kingston. I'm very excited about them and look forward to developing them."