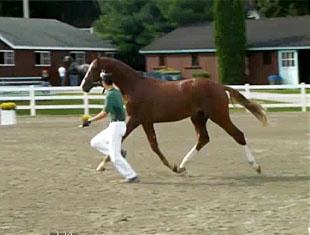 When individual breed classes took center stage on day three of Dressage at Devon 2009, two horses who had dominated the news in the prestigious show's first two days continued to grab headlines.

Perfect Qredit, a yearling colt by Quaterback, added an 83.80% win in the Oldenburg (GOV) division to his Grand Championship, Young Horse Championship, Colt Championship, and Yearling Colts and Geldings title for owner Michelle Coursin, an air-traffic controller based in Afghanistan.

Iron Spring Farm's 11-year-old mare Rabiola, by Metall out of Fabiola, won the KWPN-NA Three Years and Older class with an 88.40%, adding to her Wednesday's Mature Horse Championship and Reserve Grand Championship. The KWPN Two Years and Younger class also produced another win for Iron Spring Farm and owner Mary Alice Malone: Catalina, a filly by Sinclair out of Contango daughter Persimmon, topped the class with an 80.20% score.
Photo courtesy: Bill Wertmann

In the ISR Oldenburg divisions, Linda Santomenna's yearling colt BW-Raphael, a Royal Prince son out of Ariane, took the Two and Under title with a 74.80%, while Marissa Burton's six-year-old Warsteiner daughter Windlass won the Three and Older group with a 76.40%. Summit Sporthorses' yearling filly Popstar, by Popeye out of Faschon, finished first in the Sport Pony class with a 72.60%.

Maryanna Haymon had a big day with her horses winning both Hanoverian classes. The Two Years and Under class was claimed with an 80.20% by her filly Duet MF, by Don Principe out of Rotina. The Three Years and Older class was won by Haymon's mare Fuerst Dancer MF, by Fuerst Heinrich out of EM Rotina, who earned an 80.80%.

Another type of dynasty brought home the ribbons in the Gypsy Vanner Horse and Gypsy Cob and Drum Horse classes. Three-year-old EBV Airwalker and his weanling son Java Joe brought home the blue and red ribbons, respectively, in both classes for owner Mary Ann Riess.

A first for this year's Dressage at Devon was a class sponsored by the breed association US PRE, supporting the increasing popularity of Pura Raza España horses in this country. Both winner Icono HGF (66.80%), by Idilio II out of Escapada III, and second-placed Genio HGF (63.80%), by Grandioso III out of Ibiza, were bred at Michigan's Hampton Green Farm. Both three-year-olds will shortly be on their way to Olympic veteran Martin Schaudt's barn in Germany. Hampton Green owner Kim Boyer said Schaudt became interested in the youngsters based on the quality of their sires while working with FEI rider Courtney King Dye, who's now riding Grandioso.

This was the second year for a Nokota Horse class at Devon, sponsored by the Friends of the Nokota Horse Conservancy. These native horses, descended from those ridden by Plains tribes and still in need of protection and preservation, are gathering a small but growing-and, as the audience demonstrated, enthusiastic-group of supporters.

Twelve-year-old winner Mickey Blue Eyes' distinctive white-and-black coloring grabbed immediate crowd interest, and the gelding's performance earned a 70.10 from judge Janine Malone. Owner Dorothy Bettle, of Blue Goose Stables in nearby Cochranville, says he loves kids and foals, does tricks, and even paints the occasional T-shirt, earning him the name "Mickeyangelo". She adds, "He's perfect for me. We're together forever."

Of course, it's not all about competition at Dressage at Devon. Education is also extremely important to the event. Among the exciting educational opportunities was the George Williams Forum on Wednesday evening. The Forum has become a Dressage at Devon tradition, with international experts headlining the event each year.

Williams spoke about his special relationship with the black mare Rocher and shared some of the pair's experience around the world. "The Forum was well-received and a big success," said Anne Moss, Forum Coordinator, of the event. "People were excited to have George sign their posters."