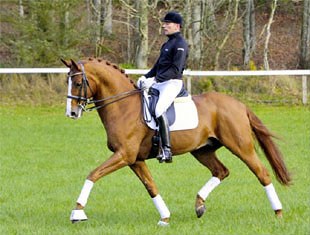 and have offspring with good competition results.

Weltjunge is a 1997 born Hanoverian bred stallion by Weltmeyer x Matcho AA x Pik König. In 2000 he got approved for the Danish warmblood society and became a premium stallion. He scored solid 9s and a 10 for trot in his performance test. He has been successful himself up to Prix St Georges level. Weltjunge has 400 registered offspring of which many mares are medal winners in breed shows. This chestnut stallion is owned by Katrinelund which has two more Elite stallions at their station: De Noir and Crelido.

Blue Hors Don Romantic is a 10-year old Danish bred stallion by Don Schufro x Romancier x Mago xx. He won the 70-day performance test in 2002 and won the 4 and 5-year old qualifiers for the Danish Young Horse Championships. He became injured afterwards and has been struggling to make a come back to the show ring. He has 101 tested mares of which 3 won the gold medal, 3 the silver and 5 the bronze. He has six licensed sons. Six of his offspring qualified for the 2009 Young Horse Championships: Appetizer Toftøje, Flora Danica Royal, Karina Lihmskov, Darbie Dallas, Don Diamo and Jaqüet Don-Bell