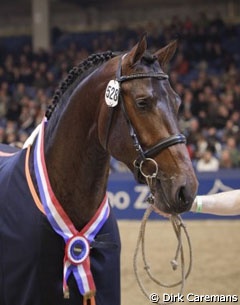 A bay nameless colt by Oscar x Corleone has been proclaimed champion of the 2010 KWPN Stallion Licensing in Den Bosch, The Netherlands, on February 6, 2010. The champion is bred and owned by Gert Willem van Norel.

The champion of the licensing is by Oscar out of keur and preferent mare MacBeth (by Corleone). He is a full brother to the 2009 Pavo Cup finalist Anne Beth. Owner Van Norel had more reason to celebrate because three of six premium stallions in the KWPN champion's ring were out of stallions that he is standing at stud: Oscar, Uphill and Winningmood.

Mr. Hamoen, chair of the KWPN Stallion selection committee, commented that the Oscar champion stood out with his "outstanding conformation and quality in all three basic gaits." 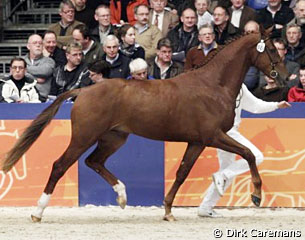 The KWPN Select Sale, the auction following the licensing, was not of a super money-making event this year. The price highlight sold for "only" 90,000 euro. Stud farm De Sterrenhof acquired the jumper Countdown H (by Cornet Obolensky x Corland) for this knock down price.