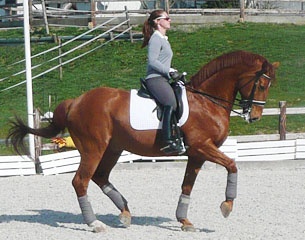 British Olympian Emma Hindle has acquired a new Grand Prix ride to strengthen her team of high performance horses. Her newest addition is Brisbane, a 10-year old Swedish warmblood gelding by Briar x Amiral, which she discovered at Otto Hofer's stable in Switzerland.

Hindle tried out "Brisi" the first weekend of February and immediately had a good feeling aboard the powerhouse chestnut. "I drove straight from the stallion show in Verden to Switzerland to try him out," Hindle told Eurodressage exclusively. "He's my type, my size and I really like the way he moves." The Swedish gelding relocated to Brookhouse Stud in Erbach, Germany, soon afterwards.

Hindle keeps a realistic perspective on the speed at which new partnerships are formed. "Of course you have to wait and see. It has to work. However good he is, you have to build a partnership. He has enough quality and I can do the Grand Prix movements with him. I've always been very spoilt. I've had two good horses (Wie Weltmeyer, Lancet) with whom I formed a friendship. You look for that because you're stuck in 'what you know is what you like'. You get weary of something that doesn't feel familiar."

Emma currently has four Grand Prix horses, three of which she trained to GP level herself: Furstenreich, Chequille Z and Diamond Hit. "They are 12 now and am looking forward to Rio with them." Hindle takes much pride in having trained her trio of breeding stallions to the highest level. "I educated these myself and that is also an achievement," she said. "I trained them to a good standard at Grand Prix level." 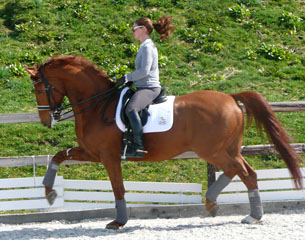 But why buy another Grand Prix horse with three rising stars at hand? "I was actually looking for a Prix St Georges horse to bridge the gap, but if a Grand Prix horse comes your way, then you can't say no," she admitted. With Brisbane she has an extra iron in the fire. "If it works out for London, that would be super, but I also have other horses."

Emma's principal Grand Prix horse Lancet, an 18-year old Hanoverian stallion by Wenzel x Shogun xx, fully recovered from an injury he sustained in 2010 and was back in full work over the winter. Due to his age, Emma played with the idea of retiring the dark bay stallion from competition and offering him as a schoolmaster to her riders at home.

"He would have been perfect for the girls to learn the changes, but since it's been a bit warmer out, he has thrown everyone off and I'm riding him again," said Emma. "I thought he has done his job, but now he actually looks brilliant and Nathalie (zu Saeyn-Wittgenstein, close friend of Emma's) has advised me to compete him again. He's fit." 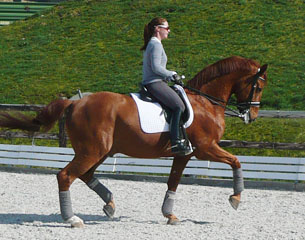 Emma has set up a show schedule for Chequille Z and Furstenreich and has entered them for the CDI's in Stadl Paura and Mannheim as well as two national shows. Diamond Hit will not be competed as he breeds too much in the spring. Hindle is toying with the idea of maybe competing Lancet and Brisbane at the CDI Wiesbaden but that is not yet a certainty. "I'll probably take Brisi with me to Stadl Paura and train him there in the main ring," she said. "Then we'll see what everyone thinks of him."

Hindle's trainer Richard White is coming to Germany in two weeks for a status update on the Brookhouse horses' fitness and training level. "With Brisbane we'll run through the stuff," she said. "There's still lots of fine-tuning to do."

Related Links
Rumour Control: Emma Hindle On the Road to Recovery with a New Perspective on Life
A Day at Brookhouse Stud, Home of Happy Athletes and Multitasking Men
Hindle and Lancet Finish 8th at 2009 European Championships in Windsor