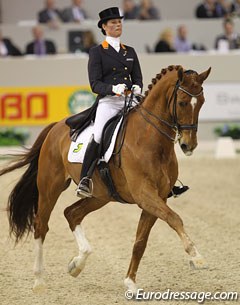 The Netherlands' Adelinde Cornelissen is firm favourite to take the 2010/2011 title at the World Cup Dressage Final in Leipzig, Germany in three weeks' time. But Cornelissen is a rider who knows more than most about the fluctuating fortunes of international sport, so despite five fabulous victories with the majestic Parzival during the hotly-contested 10-leg Western European League qualifying series, the 31-year-old expressed only cautious optimism after her most recent success on home turf at 's-Hertogenbosch 10 days ago.

"You can never predict what is going to happen, so instead I just concentrate on getting better and better with Parzival - that is my goal", said the Dutch woman.

THE ONE TO BEAT

There is no doubt that she is the one to beat however and, if she is successful, then she will bring the Dutch tally to 11 victories from 26 finals. Her fellow-countrywoman, Anky van Grunsven, holds the unchallenged record for most wins in the series. Over a 13-year period stretching from 1995 to 2008 she claimed the title on nine occasions with the her two star rides, Bonfire and Salinero.

Dutchman Edward Gal will compete as defending champion this year, but without the much-loved Totilas who, during a sensational record-breaking spree, stole not only all of the most important titles but the hearts of spectators all around the globe before his sale and temporary retirement from competition in order to concentrate on breeding.

The principle threat to Cornelissen seems likely therefore to come from the host-nation contingent, as German riders have been in flying form throughout the winter months and Ulla Salzgeber and her compatriot Isabell Werth have been particularly impressive. Both ladies are double FEI World Cup™ Dressage champions - Salzgeber recorded back-to-back wins in 2001 and 2002 riding the great Rusty, and she put herself right back in the frame this season when first winning the Central European League qualifier at Kaposvar, Hungary in October and then bringing the exciting Herzruf's Erbe out to top the line-up in the Reem Acra FEI Western European legs at Frankfurt and Neumunster.

Multiple-medallist Werth claimed her first title with Fabienne in Gothenburg in 1992 but had to wait another 15 years to repeat that achievement with Warum Nicht in Las Vegas in 2007. She said at 's-Hertogenbosch recently that she may opt for the 17-year-old Satchmo, runner-up for the series title in 2009 and winner of this season's opening round of the Western European League at Odense in Denmark, as her choice for Leipzig.  But she also headed the second leg, at Lyon in France, with her 2007 champion Warum Nicht who has been incredibly consistent over the past few months, so she has great strength in depth in her string of equine talent.

Patrik Kittel and Scandic cannot be overlooked either. At the penultimate Western European qualfier in Gothenburg, the Swedish partnership finished a close second to Cornelissen and looked to have plenty of room for further improvement as they continue to grow in confidence. But the 2010/2011 World Cup Dressage final is not just about Western Europe - qualifying leagues have also taken place in Central Europe, North America and the Pacific region and a total of 18 riders will compete for the title including Central European League winner, Katerzyna Milczarek from Poland and runner-up, Hungary's Robert Acs.

European-based Catherine Haddad has enjoyed a great season with Winymaro, who has rarely been out of the ribbons and is long-destined for the Final, but her fellow-Americans Jan Ebeling and Shawna Harding have, only this week, joined the list of starters following the last US qualifier at Burbank in California.

So far, riders from nine nations are confirmed for the seasonal finale which promises to be a great celebration of the new three-year sponsorship deal with leading fashion designer Reem Acra of New York. And it will be a ground-breaking event due to the presence, for the very first time, of a new Judges Supervisory Panel which will oversee the work of the seven-strong Ground Jury judging team whose tough job it is to measure the individual performances and to separate the best from the rest. This development brings Dressage in line with many other world-class sports, demonstrating the capacity of a discipline which is firmly rooted in tradition to embrace modernisation. And it also shows its capacity to remain forward-looking - always seeking new ways to appeal to competitors and spectators alike.

New ground is also being broken due to the staging, for the very first time in the history of equestrian sport, of four World Cup finals at the same fixture. The Rolex FEI World Cup™ Jumping, Reem Acra FEI World Cup™ Dressage, FEI World Cup™ Driving and the inaugural FEI World Cup™ Vaulting finals will take place under one roof in Leipzig from 27 April to 1 May, bringing together four world-class disciplines for a fabulous festival of horse sport.

But the question for the Dressage contenders and their fans is whether Cornelissen and Parzival will go down in the record books as the 2010/2011 Reem Acra FEI World Cup™ champions. Only time will tell.

Back to the 2011 World Cup Finals' Index