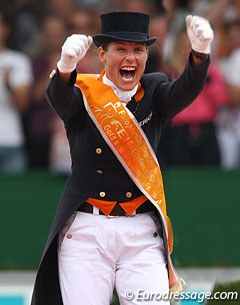 A while ago I got an email in reaction to my previous editorial "A Slip of the Tongue" which said something in the line of "thanks for the great editorial but can you please write on something positive the next time". Straight away I thought: "Deal."

After last week, I know now that I've found the perfect subject for a positive editorial: the 2011 European Dressage Championships. However, as scepticism is an innate or maybe nurtured trait in me I cannot guarantee pink-glass positiveness until the end.

I have a love-hate relationship with Rotterdam. I've only been going to the show for two years (2009, 2010) and the reason why I went in the first place was to see Totilas compete at Grand Prix level for the first time. Rotterdam is a 2-hour drive for me but the traffic in the area during rush hour is horrendous. Bad traffic is an instant turn-off for me to attend a show. Miraculously I was only stuck in a jam for 20 minutes but weeks after the show I got a nice envelope with the logo of the Dutch federal justice department on it: speeding ticket: 85 euro or so. Also parking your car near the show grounds is impossible and you have to stow your car 3 kilometer away from the show ground and take a shuttle to the show. It didn't go all that well back in 2009.

In 2010 I thought I outsmarted the system. I just parked my car right in the street next to the show grounds (with is reserved for residents of the area). I was willing to take the risk for a parking ticket. Rotterdam was also not the nicest place to take photos at. There are a few shows in Europe which are just an arena (with excellent footing) and a square of white tents encircling the venue. There is so much white in your photographs it hurts your eyes when you watch the pictures on the monitor. A few weeks after the 2010 show the same letter was in my mail again: 60 euro fee for parking in the wrong place. No... Rotterdam was definitely not on my favourite's list. 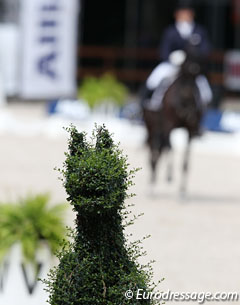 When I heard the 2011 European Championships were being held in Rotterdam I cringed. Yet all my acquired frustrations with the show vaporized last week. I was fortunate enough to have a hotel room in the rider's hotel which was closest to the show. I parked my car at the hotel and had a super shuttle straight to the show's front door. Yippie! When I walked to the stadium on Wednesday I saw the brand new grandstand which looked awesome! It would certainly make a much nicer backdrop than the usual white tents.

I arrive at the press centre and I got immediately ticked off by a ridiculous policy that only "print media" photographers were allowed a bib (which means access) to the stadium. I don't have a temper at all -- I'm pretty much hakuna matata -- but within seconds I was enflamed by this discriminating rule which was decided upon based on the advice two print media photographers gave. They believe to wield the axe of power in the equestrian media world even though they have a restricted reading audience. I think I was more angry by this pretentious power play than anything else. After a minute of Belgian brawling I calmed down and told myself that barking dogs don't bite. 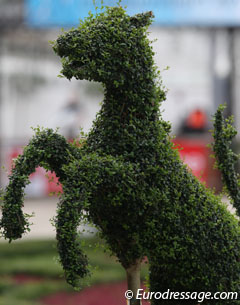 With the exception of a lousy wireless network (fixed by using cable connection) and the worst team award ceremony ever in history for photographers (because officials and camera guys ALWAYS stood in front of every single picture) the 2011 European Dressage Championships were a total blast and also the internet refusée photographers were allowed in the show ring afterall to take photos. Great Britain was mind-blowingly good! The competition was such a thriller, the show atmosphere was great... and the weather was good!!! Hallelujah.

On a more personal, non-professional, note I had a blast in the hotel hanging out with the riders for drinks and chit chat. It is always so nice to meet the person behind the rider and not talk shop, I mean horse, all the time! On Saturday evening we took it into the wee hours, which resulted in us being kicked out of the restaurant bar and being exported to the lobby where it all ended with a bang. An undisclosed famous rider fell over the coffee table while taking a picture and knocked over the glasses and decoration on it. It was definitely time to go to bed.

Working towards an apex has its toll as well. Each year there is an international championships as highlight of the season and as riders focus all efforts on it, not all horses make it healthwise. It was amazing to see quite a lot of horses very tender on the legs as soon as they had to do the extended trot or half passes. They started to nod their head like a rocking horse but the bell never rang. At least two horses had very visible spur marks and in the under 25 division there were two lame horses and one bleeding from the mouth. They all made it through the vet inspection and bit and spur check. For whom the bells toll?! 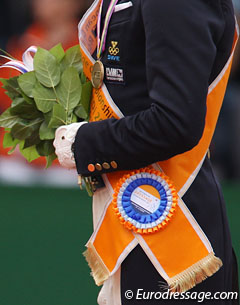 Then another aspect one can ponder about it is how puritan or pure should the dressage sport be. Several top scoring horses are trained so fundamentally wrong: hollow backs, hind legs out and heavy in the contact, but they are so regular and correct in their incorrectness (and have fabulous gaits) that they still score 70+ Is this nitpicking, a sign of my inflexibility towards "modern dressage" or the last spasms of a dressage lover craving for a higher score for better trained horses instead of more spectacular ones?

The wake a major championship creates is amazing. Weeks after the event the rides are still being discussed on internet fora and videos are shared and discussed all over the world. The buzz carries on and will take us through the more boring winter season. As soon as the first trees start to bud the excitement will build up again because 2012 will be an Olympic year and nothing beats the Olympics. That's the only event where it really matters for an athlete if he wants to be truly recorded in the history books. With an official acceptation for accreditation as photographer at the 2012 London Olympic in my pocket, I'm looking forward to next year's excitement!