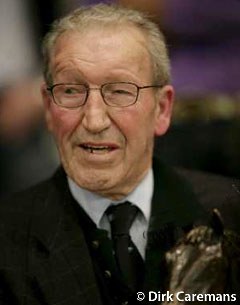 Huub van Helvoirt, the most renowned and successful breeder of KWPN dressage horses in The Netherlands, has passed away early this morning 11 October 2011. Van Helvoirt was 89 years old and had been ill for quite some time.

Van Helvoirt wanted to stay home with his mares in Rosmalen as long as possible, but last week his condition worsened and he was hospitalized. Early this morning he passed away and joined his wife, who passed away in April 2010 and with whom he shared his love for horses.

Zuidenwind and Charmeur are both Pavo Cup Champions and the former stallion is one of the most popular breeding stallions in Sweden at the moment.

Huub van Helvoirt was proclaimed KWPN Breeder of the Year in 2005.

Before his death van Helvoirt made an arrangement with Jan Vink of Black Horses Stud Farm in Papendracht, who will take over his mare band.