Dressage to Become a Blood Sport?! 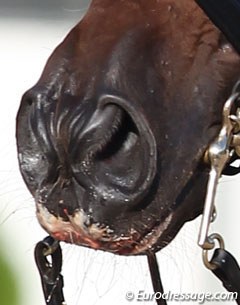 Dressage might be on the verge of officially becoming a blood sport as the deadline approaches for the FEI Dressage Committee (DC) to decide on which blood rule they are going to present at the 2011 FEI General Assembly in Rio de Janeiro. Will the DC propose the IDTC inspired blood rule which allows blood to taint our sport, or will sense for the welfare of the horse return to dressage?

Three years ago Princess Haya decided to replace the Dressage Committee (DC) with a more democratic and progressive group of people that could improve the sport and take it into the next century. Is the current committee, which includes Thomas Baur, David Hunt, Margit Otto-Crepin, Elisabeth Lundholm, Anne Gribbons, and chair Frank Kemperman, taking the right direction by proposing a rule that allows blood to stain a horse's mouth at competitions?

Following spilt blood at the 2010 World Equestrian Games, the board of the International Dressage Trainers Club took the initiative to propose a rule change which has been adopted almost verbatim by the FEI Dressage Committee in their proposal sent to the NF's for approval in June without taking the opinion of the IDRC into consideration. The proposed rule was:

"At top level events (Olympic Games, Championships and Finals for seniors), where FEI vets will be present at the warm-up arena, they would examine the horse and the test would resume if bleeding from minor injuries had stopped. If the bleeding had not stopped, the horse would be eliminated. Where vets are not present to examine the horse, bleeding would result in immediate elimination." 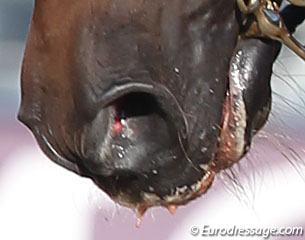 The IDRC immediately reacted by publicly pointing out the total impracticality of the rule, the favouritism towards the senior elite riders, as well as the regrettable fact that it will give more leeway for training issues to be accepted in the show ring.

In order to take a final stand against dressage being turned into a blood sport, the presidents of the IDRC (Kyra Kyrklund), IDOC (Mariette Withages) and AIDEO (Vincenzo Truppa) sent a straight-forward statement to FEI Dressage Director Trond Asmyr and DC chairman Frank Kemperman. Their hope is to make clear that the majority of dressage stakeholders do not want to taint the sport with blood.

The majority of the movers and shakers in dressage are requesting to change the rule to the following:

"If blood is seen anywhere on the horse during a test, the Athlete should be stopped by the Judge at C and eliminated from the competition and required to leave the arena. The blood may or may not be related to abuse, but it indicates a problem that requires attention. ?The Judge at C’s decision cannot be appealed.

If blood is found by the steward after the combination leaves the arena the rider should not be eliminated. However, the show veterinarian will be notified and the horse’s fitness to continue will be assessed.

If blood is found prior to the competition but has stopped before entering the arena, the combination will be allowed to compete if the show veterinarian or Steward declares that the horse is fit to compete. In any case, the rider has to keep his original starting time." 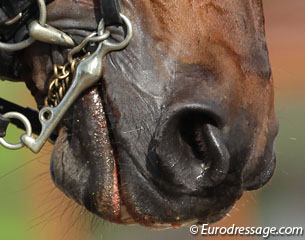 Isn't democracy all about following the voice of the majority or is the FEI Dressage Committee becoming a gerousia, a council of elders which can veto any motion voted on by the majority of representatives of the sport?

It looks as if jumping and eventing are dictating FEI rules and policy and dressage has become the unwanted foster child that needs to comply to the wishes of its evil stepsisters. The blood rule for show jumping and eventing are different from dressage and the bigger disciplines may be putting pressure on the Dressage Committee to accept blood in its discipline because they fear that if dressage chooses for a zero-blood tolerance the big money-making discplines will have to change their rules in the future as well.

Dressage is totally different from show jumping and eventing in which horses are not being put in contact with wooden fences (on which horses can scrape their skin) nor deal with the speed, accelleration, energy to generate explosive jumps. The FEI may be comparing apples with oranges! 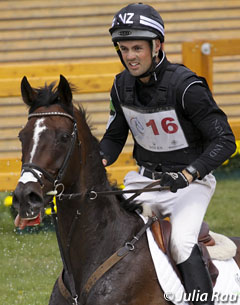 Albeit there never is a reason for blood to be on a horse, in any FEI discipline. Rough and poor riding can not be tolerated and it is time that the FEI (and Dressage Committee) stop paying lip service to the animal welfare motto but live up to it!

The Dressage Committee will be presenting its final decision on the blood rule soon submitting their final proposal for the FEI Bureau to vote on at the 2011 FEI General Assembly.

Please show your support for the IDRC/IDOC/AIDEO joint statement for the RIGHT version of the blood rule!! Voice your opinion on what direction you like to see the sport take by emailing us at info@eurodressage.com. We will relay your mails to Trond Asmyr and Frank Kemperman at the FEI Headquarters!

You can also discuss this topic on the Eurodressage Facebook Page

Related Link: Editorial: A Slip of the Tongue: on tongue issues and blood rules