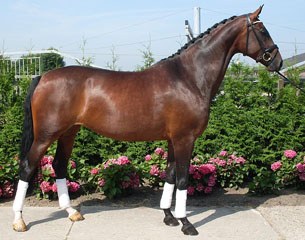 Eagle, an Apache x Cabochon offspring which is allowed to participate in the 2012 KWPN Stallion Licensing, sold to the British Libby Towers for 54,000 euro.

Sixty horses aged between 2 and 7 were offered at auction to a large crowd which gathered at the centre. The second most expensive horse was Earl, a chunky Sir Scandic x Wilawander offspring sold for 46,000 euro to Belgian Grand Prix rider Stefan van Ingelgem. The 4-year old licensed stallion Don Havidoff (by Don Schufro x Havidoff) moves to Great Britain for 40,000 euro.

The 2-year old black colt Eurolife Texel (by Rhodium x Jazz) sold for 40,000 euro and will be trained by Willem Jan Schotte.

The 13-year old Westfalian licensed stallion Future (by Florestan x Apart) did not appear at the auction but has been sold as a breeding stallion to Austria. The stallion will make his moves to the Alpine country mid April.