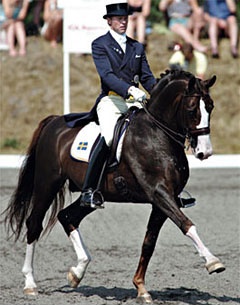 Hans Yngve Goransson's Briar (by Magini x Krocket) ranked 11th on the 2011 WBFSH sire ranking and proved his worth as a dressage breeding stallion. All offspring at the base of this ranking are Swedish warmblood registered.

Briar is a 1991 born liver chestnut stallion which is curently standing at stud in The Netherlands.