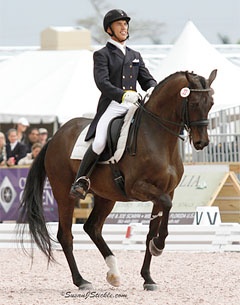 James Koford, of Wellington, FL, was all smiles as he won the Grand Prix Freestyle in the Wellington Dressage CDI-W on Saturday 4 February 2012.  Riding Hannah Holland-Shook's Belgian warmblood Pharaoh, Koford won the featured event of the 2012 Global Dressage Festival (GDF) with a score of 73.300%.

Shawna Harding, of Aiken, SC, was second with Come On III scoring 70.575%.  Koford's winning attitude did not go unnoticed by Janet Foy, who served as the FEI Judge at the letter "C".

"What I really so enjoyed was Jim's smile during the pirouettes and the piaffe/passage parts of the test," said Foy. "You can tell he enjoys this horse and was really nice to see."

The test was also nice for Hollandshook to see. The 20-year-old was Koford's groom on Saturday, but shortly before coming to Florida she had a successful outing on Pharaoh at the Intermediare I level.

"She's a super rider and she will ride him again when he has a bit more confidence at the Grand Prix Level," said Koford of his student. "This is all good for Pharaoh.  I want to prepare him for Hannah to ride in the Grand Prix classes for riders under 25-years-old.  It's nice to be doing so well with him."

Shawna Harding did not have the test that she was hoping for in the Freestyle. "We had a flying change disaster this weekend, but now we know where his strengths and weaknesses are," said Harding of Come On III.  "I'm looking forward to working next week with Steffen Peters and Anne Gribbons to make him a bit sharper, more serious in the ring.  He's a special horse with a huge heart, so I can't fault him." 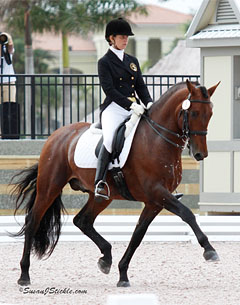 With only two competitors in the small tour classes the competition was light at the inaugural CDI at the 2012 Global Dressage Festival. Nevertheless Mica Mabragana and Cuatrero IV, owned by Hampton Green Farm, won the Prix St Georges and Intermediare I. In the latter class she scored 64.474%.

Mabragana was pleased with the performance of her horse, "The trot had a bit more power today and I was pleased with his pirouettes." Mabragana is from Argentina, but is currently based in the United States.  She trained as a working student with Lendon Gray before working for Hampton Green Farm.

Ashley Holzer of Canada and Pop Art won the FEI Grand Prix with a personal best score of 73.596%. Holzer was pleased with their test.

"Pop Art is like a young horse again," said Ashley Holzer of her 2008 Olympic Games mount. "The footing and the venue is great. I think it's wonderful what Mark Bellissimo has done here. For dressage to grow, we need a facility like this. They have done a great job in a short amount of time." 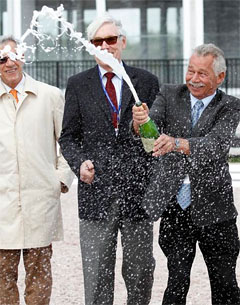 Shawna Harding of Aiken, SC, was second out of the fifteen entries in the FEI Grand Prix class riding Come On III and scoring 68.596%. James Koford and Rhett were third with 67.766%.

"My horse is getting stronger," said Harding. "We had three unfortunate mistakes, a bobble in the one tempis, but I know we can improve on that. The passage and his confidence are getting better. The new venue overwhelmed him a bit because it is enclosed by the large row of bleachers, but he has to get used to it."

Holzer was aboard Pop Art, the horse that she rode in the 2008 Olympic Games.  The pair scored an impressive 71.867% in spite of Holzer's mistake. 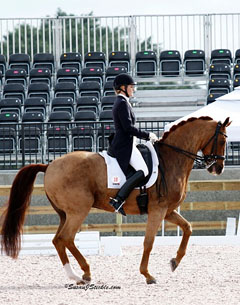 "My horse was great, his jockey today was not stellar," said Holzer. "Because this Olympic Special is a bit different from the Grand Prix Special I normally do, I had a moment of confusion on the centerline after the first pirouette, and made a mistake on the one tempis. I am happy with my horse though, he feels like a young horse again."

This Olympic Grand Prix Special is a shortened version on the traditional Grand Prix Special test. The International Equestrian Federation (FEI), the governing body for international equestrian competitions, created the shorter test to help with the time constraints during the Olympics.  For some nations, the test is a requirement for those seeking to qualify for the 2012 Olympic Games in London.  Canada is one of those nations as well as the United States.

James Koford, of Wellington, FL, finished second in the Special on Rhett with a score of 68.133%. Dong Seon Kim of Korea was third on Bukowski scoring 66.089%.