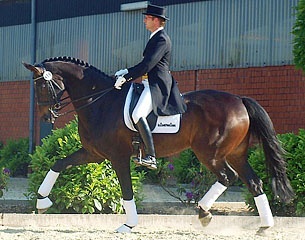 Heinrich Kampmann's Grand Prix horse Franziskus has returned to the show ring under a new rider, Martin Stamkotter. The 14-year old Westfalian gelding (by Fidermark x Potsdam) has been with Stamkotter just for a few weeks.

The combination made their debut at the local competition in Borken and finished in the Grand second with 67.191% behind Anabel Balkenhol on Winci.

The Warendorf based Martin Stamkotter is already Franziskus' fourth rider. He was initially trained by Rudolf Zeilinger, but was then moved to Hubertus Schmidt and later on Christoph Koschel. In November 2011 owner Kampmann moved the horse home to Lingen and initially said he would ride him himself.

"“it's a joy to ride this wonderful horse," Stamkotter stated.

Martin is no stranger to riding Kampmann's horses. He used to train Westfalian licensing chamion Dancing Dynamite (by Don Bedo x Fidermark) age five and six, when the stallion was stationed at the State Stud in Warendorf.

Franziskus' next show will be the CDI Lingen.