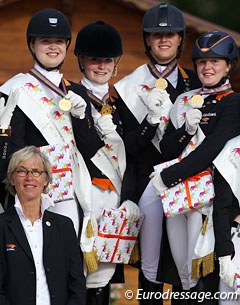 Dutch Dana van Lierop and her Dutch warmblood gelding DJ Tiesto became the instrumental combination in achieving team gold medal for The Netherlands at the 2012 European Junior Riders Championships at the Swiss National Equestrian Centre in Berne, Switzerland, on Thursday 12 July 2012.  The silver medal went to Germany, Denmark was good for bronze.

The perpetual battle between Germany and The Netherlands was a close one until Van Lierop entered the arena and rode a brilliant test aboard her impressive dark bay Rohdiamant offspring. With only one tiny imperfection in her otherwise immaculate test, Van Lierop scored 77.405% and placed first with all five judges. The panel consisted of Leyman, Matthiesen, Svaling, Burchler-Keller and Fouarge.

A break into canter after the halt at entry was the one error Van Lierop made in her very powerful presentation. DJ Tiesto was consistent in the frame, good in the contact, forward and energetic without getting rushed. There was hardly anything to remark on  their ride. The trot half passes and extensions were ground covering, the extended walk was superb, the walk pirouettes were well ridden. Also in canter, DJ Tiesto was on top of his game with his huge, straight flying changes. 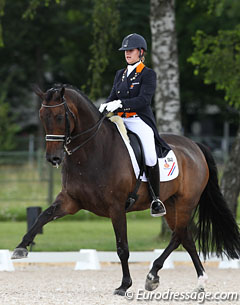 Van Lierop contributed a whopping 77.405 % to the Dutch team score of 221.459 points, which was further based on Antoinette te Riele's 72.081% mark (4th place) and Suzanne van Ven's 71.973 % (5th). The Weert based Te Riele and Leida Collins-Strijk and Diederik Wigmans' 7-year old Dutch mare Ziggy (by Riverman x Flemmingh) was very constant in the bridle and showed quality trot work. However, the extended walk did not have enough overtrack, the collected walk was slightly tense, and the mare dragged her legs in the rein back. Still Te Riele was very accurate in her riding and in canter she rode big flying changes and strong half passes. Suzanne van de Ven and Stephanie Peters' 17-year old Rhinelander mare Donna Gracia (by Donnerschlag) were sailing smoothly through their test. The liver chestnut mare had the right impulsion which enabled the rider to show off good half passes and big changes. The mare does open her mouth quite a lot and the extended walk could have had more overstep. Nevertheless, Van de Ven held her mare nicely with the poll as highest point which earned her a seventy percentage score. 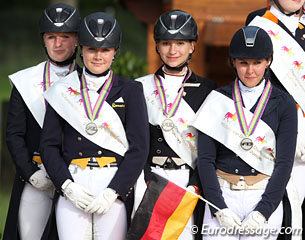 2011 European Junior Rider Champion Vivien Niemann led team Germany to a silver medal with her 74.865% earning ride. Aboard the 8-year old Hanoverian gelding Cipollini (by Compliment x Western Star), Niemann finished second in the overall ranking. The combination also started with a small hiccup as the horse dropped from canter into trot right before the halt at entry. The trot work had a super rhythm with Cipollini showing good activity from behind. The extended walk had good overtrack but could have been a bit more energetic. In the collected walk there was a slight loss of clarity in the rhythm but the turns on the haunches were well done. At all times, Cipollini stayed in a perfect frame with the nose nicely out and the poll as highest point. The canter work was outstanding. The big changes were a highlight even though the second flying change came a bit early on the diagonal. 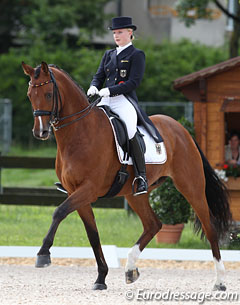 Team Germany scored 218.676 points and won silver. Vivian Scheve and her 8-year old Westfalian gelding Bellheim (by Belissimo M x Warkant) were key players in this result. As new comers on the German team, Scheve and Bellheim revealed hardly anything of their rookie status. The bay gelding has much spring in trot. The horse broke into canter in the first trot extension, but the second one was good. Bellheim dropped behind the vertical in walk in between the pirouettes. The flying changes were very elegant but the third change was short behind. The extended canter was very uphill. Scheve scored 72.541 to finish third overall.  German team debutants Bianca Nowag and Dauerbrenner (by Democraat x Finalist) placed 6th with 71.919%. This pair was very solid in the trot movements, but the execution needed fine tuning. The onset of the half pass right was a bit sloppy and the first medium trot was a bit conservative. The extended walk was lovely, the walk pirouettes were good but a bit quick. The canter work was the pair's strong side with big, confirmed flying changes and a beautiful extended canter but overall Dauerbrenner leans too much on the bit and could be lighter in the contact. Germany's scratch score was 70.21% (!), achieved by Maxi Kira von Platen on Flamenco Girl (by Fielmann x Weltmeyer). 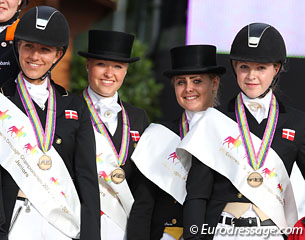 The Danish team finished in bronze medal position with 206.946, only 1.486% ahead of the fourth ranking Belgian team. Mille Larsen Warncke and Anna Kasprzak's Danish mare Langkjaergaard's Donna Fetti (by Don Schufro x World Cup I) became the anchor of her team with a 69.243% earning ride. The long legged chestnut mare Donna Fetti is an incredible light-footed mover. She is like a ballerina in trot and produces scopey changes. In the extended walk she could have lowered the neck more but the collected was good. The mare was steady in the contact though could have been a fraction higher in her head-neck position. Last year's double European bronze medallist Anna Zibrandtsen performed below par on Capriciella (by Cordoba) with 69.081% and 12th place finish. This Hanoverian mare is also a very refined mover with unbelievable shoulder freedom. She has much schwung in trot and executed great half passes. The score dropped below 70% due to issues in the walk. The mare was quite tense in the collected walk and became lateral as she got distracted. 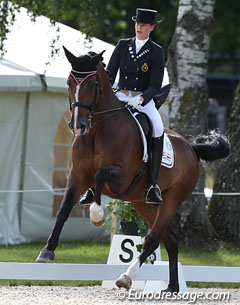 The Belgian team was spearheaded by Jorinde Verwimp and Alexa Fairchild. Both riders scored over 69% but needed a little extra in order to take hold of a team medal. Verwimp and her tall Dutch warmblood gelding Tiano (by Lester) were very controled and in charge of each single movement. The gelding is very ground covering in the trot and canter extensions but pushed the neck a bit high when lengthening the strides. The flying changes were massive. The rein back proved to be an issue. The pair finished 9th on a score of 69.595% but this could easily have been one percentage higher. American born Alexa Fairchild and the Dutch warmblood gelding Totall Tip Top (by Metall x Ulster) placed 10th with 69.27%. The dark bay was very forward in trot and displayed good cross over in the half passes but could have been more closed and collected in the frame. The flying changes were uphill and ground covering.