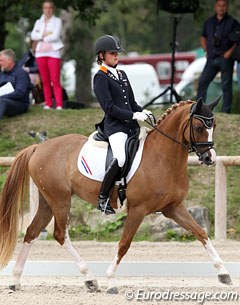 Under Dutch rider Rosalie Bos Paso Double (by Bodo x Inselfurst) was the 2011 Dutch 5-year old reserve champion and the chestnut become a member of the Dutch Pony team that competed at the 2012 European Pony Championships in Fontainebleau, France. There Bos and Paso Double accomplished great achievements winning team silver as well as individual test and kur to music bronze.

Right after Fontainebleau the pony came on the market as the Bos family wanted to secure money to acquire a junior rider' horse for Rosalie. The Rothenberger family, which is known for buying the best ponies in The Netherlands and Germany almost every year, helped in the acquisition of Paso Double. The pony is currently owned by an undisclosed person, but Semmieke Rothenberger will get the ride on the mare for the next two years.

"We are very happy about this new addition to our stable and can't way to start working with her," said Rothenberger.