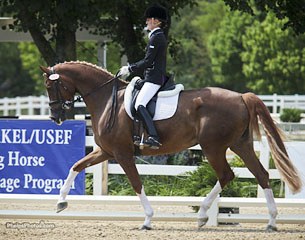 The 2012 U.S. Young Dressage Horse Championships got underway on Thursday 23 August 2012 at the Lamplight Equestrian Center in Wayne, ILL, USA. In the 5-year old division Alice Tarjan and Elfenfeuer jumped out to the early lead after the Preliminary Test, though the morning began with optional Warm-Up classes for competitors in the 4-year old division.

Tarjan and Elfenfeuer (by Florencio I x Sion) were the first combination to perform their Preliminary Test in the 5-year old division, setting a standard no one else in the 14 horse field could rival. The Oldenburg mare owned by Tarjan (Oldwick, NJ) scored an overall 7.66 after earning high marks for submission, 8.0, and 7.8 for their canter and general impression.  They also scored 7.7 and 7.0 for their trot and walk respectively in the Preliminary Test, which counts for 40% of the overall Championship score.

Elfenfeuer is competing in her first National Young Horse Dressage Championship after having bypassed the annual event as a four-year-old. Heading into Saturday’s Final Test, Tarjan is hoping the mare will be more settled in her second Championship test. "She was really tight and on the muscle (today), it was not our best test," said Alice. "(Saturday) I hope she is a little more relaxed and we can have fun."

Tarjan purchased the imported mare as a three year old. "I liked her breeding, and she is beautiful. I thought if anything else she might make a good foxhunter, until I began training her and felt what I thought was something special." 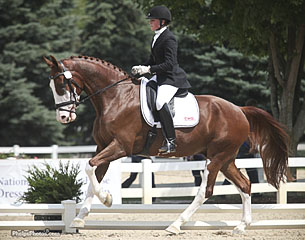 Placing second was Jocelyn Hamann (Reno, NV) and Casanova (by Lauwersmeer Laka- x  Indiaan) earning an overall total of 7.64. The pinto KWPN gelding scored 7.0, 7.9 and 8.0 for their walk, trot and canter. The pair also earned solid marks for their submission, 7.5, and general impression, 7.8.

The champion in the 5-year old division will be crowned Saturday following the Final Test, for which the remaining 60% of the overall score will be awarded.