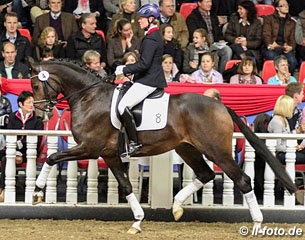 The second most expensive horse at the auction was Stoneman (by Sandro Hit x Rubinstein x Welt As). The 4-year old bay gelding sold for 100,000 euro to Russia. Six horses will move to the U.S.A. of which the most expensive one was the grey S-level trained Royal Christmas (by Royal Diamond x Donnerhall), which sold for 47,000 euro.

One riding pony was offered for sale, Coolman (by Constantin x Prince Thatch xx) which sold for 16,000 euro to Switzerland. 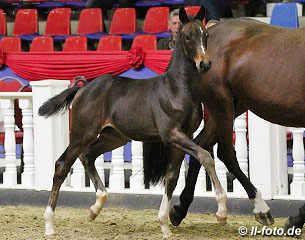 The top selling foal at this auction was the bay colt Total Recall (by Totilas x Sandro Hit x Figaro) which sold to Paul Schockemohle and Ann Kathrin Linsenhoff for the record price of 200,000 euro after a long bidding duel with American Jamie White-Welling.

The second most expensive foal was Finalsatz (by Fidertanz x Romanov x Sandro Hit) which sold for 51,000 euro to German clients. The colt Boreas (by Bordeaux x De Niro x Rubinstein) sold for 29,000 euro to Serbia.