Lisa Wilcox Receives Grant to Train and Compete in Europe 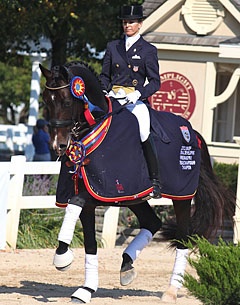 Lisa Wilcox and Horses Unlimited's Pikko del Cerro HU have been selected to receive this year's Anne L. Barlow Ramsay Annual $25,000 Grant.  The purpose of the Grant is to showcase talented American-bred horses ridden by United States citizens, by providing money to train and compete in Europe.

"I am so excited about receiving this grant," said Lisa.  "By training in Europe for two months, we will have a stellar opportunity to refine our skills and abilities, as well as introduce ourselves to the European judges and competitive scene.  Having the opportunity to train with Ernst Hoyos on a daily basis will provide Cerro and I the benefit of Ernst's consistent training.  This consistency results in a polishing of skills that can only be obtained under these circumstances."

Anne Sparks, owner of Horses Unlimited in Albuquerque, NM, said, "As a breeder who is actively involved in the breeding industry, as well as every aspect of my own program, I recognize how hard it is to produce top quality horses that have the opportunity to reach the international dressage ring.  Pikko del Cerro HU was born at my farm in New Mexico and I thought from the beginning that he was special.  Now that Cerro is competitive at the Grand Prix level, it is important that he be seen not only at CDI's in this country but in Europe as well.  It is such honor that The Dressage Foundation has given Lisa and Cerro the Anne L. Barlow Ramsay Grant to allow us the opportunity show the Europeans the caliber of horses that the American breeders are producing."

"Dr. Ramsay's gift to The Dressage Foundation has enabled us to provide important financial support to American-bred horses and their riders.  Congratulations to Lisa and Horses Unlimited on their selection to receive this year's grant.  We are excited to see the ongoing progress that they will make in the coming months and years," said Jenny Johnson, Administrative Director of The Dressage Foundation.