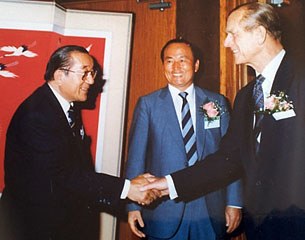 General Johnson Kim (KOR), retired FEI judge, passed away recently at the age of 85. General Kim was born in 1927 and his involvement in equestrian sport dates back to his school years when he won various national competitions.

After graduating from Korea University, he joined the national military academy to prepare for the 1952 Olympic Games but was prevented from doing so by the Korean War.

General Kim translated the FEI Rules for Jumping Events into Korean and between 1970 and 1984 represented his country at numerous FEI General Assemblies.

“General Kim was a man ahead of his time,” FEI Director of Jumping John Roche said. “The welfare of the athletes was of great importance to him and he proposed that military riders should wear protective headgear in competition over 20 years ago.”

The FEI expresses its sincere condolences to General Johnson Kim’s family, the Korean Equestrian Federation and the Korean equestrian community.