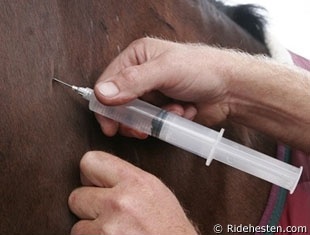 The German Anti-doping Agency (NADA) has planned to do unannounced testings on approximately 300 competition horses for doping per year. About 150 of those horses will be part of the German A, B and C-teams in the Olympic disciplines.

In April 2011 NADA was assigned by the German Equestrian Federation to do doping and medication check-ups on the German dressage, show jumping and eventing horses at home on a regular basis.

It took almost two years to turn the doping control system into a properly functioning one which is about to start in 2013. Initially a vet office for the testings had to be set up, but afterwards the entire protocol with testing standards had to be worked out.

Over the past four years Germany's equestrian sport has been tarnished by multiple doping cases, especially amongst the show jumpers. At the 2008 Olympic Games German show jumpers Marco Kutscher and Christian Ahlmann were both caught doping their horses with capsaicin. In 2009 Isabell Werth's horse Whisper tested positive to Fluphenazine.