Isabell Werth on Totilas: "Those Who Rise High, Fall Deep" 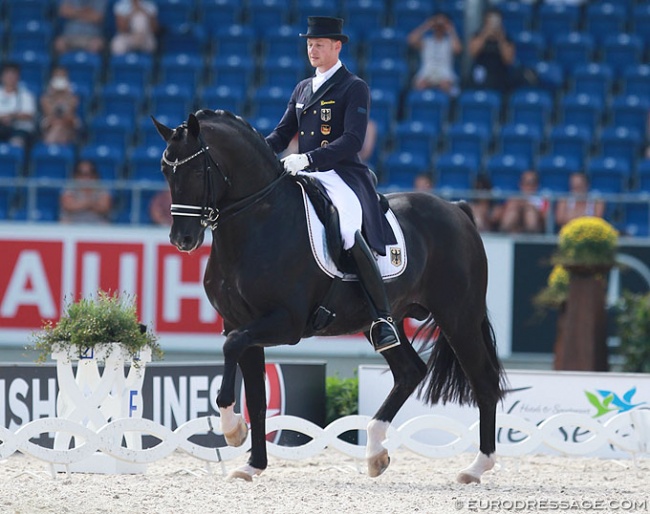 Known to be outspoken and frank about the reelings and dealings in international dressage sport, Werth does not hold back criticism on German team selection policies. Especially in the chapter on the 2015 European Dressage Championships, which were the demise of the great Totilas, Isabell has a clear opinion.

The 2015 European Championships were hosted on the holy show grounds of Aachen and Germany was the hot favourite for team gold with Totilas selected on the team, even though the horse had come back from a long period of injury. Unfortunately, the team competition became a slap in the face for Germany as well as for international dressage judging: Totilas was uneven in his Grand Prix test and could not produce the stellar scores expected to bring Germany gold. Instead the home team got a disappointing bronze. Furthermore, the judging panel and vets at the horse inspection embarrassed themselves by not ringing out the horse. The judges rewarded the test with marks between 71 and 80% !

Not only does Werth blame poor team selection for the disappointing outcome, but she also condemns the marketing machine behind the great Totilas.

"Totilas did not give his owners the coveted gold at the Olympics, nor gold at the World Championships. At the Europeans in our own country, 2015 in Aachen, Totilas' sport career took a sad ending," Werth stated. "In the Grand Prix it became clear that he suffered an injury. The vets at the trot-up were generous. But in the test it was visible: Totilas showed clear irregularities. It gave the impression that the last bits of his genius had to be repeated for the team title. The entire Totilas entourage and the experts of the Federation, who in fact expressed their regret afterwards, presented a very weak image because they chose coeveted success over horse welfare."

Werth does not hold back in her description of what happened at the time in Aachen.

"Unforgettable is also the explanation of the rider that he didn't feel anything of an injury in the saddle. And also the judges did not make a good impression. They could have ended the test. If only they had the courage. The clever co-owner Paul Schockemöhle had anticipated it and stayed at home during the European Championships because he guessed the imminent fiasco."

"This dressage horse, which moved the world like no other, became the living proof of a lapidary wisdom: 'those who rise high, fall deep'," said Werth.

"Totilas' website was closed, his press agent no longer used, nobody wanted the coffee cups (merchandising) anymore. The miracle stallion failed to produce a miracle. The book of Totilas was closed, with two final headlines," the chapter continued Totilas went into "sex-retirement" and Schockemöhle dropped the stud fee from 8000 euro to "bargain price" of 2500 euro.

Related Links
Totilas Completely Retired from Public Presentations
The End of an Era: Totilas Retired from Sport
Edward Gal and Totilas Not Reunited for a One-Time Riding Session
Rath and Totilas Win the Special at 2014 CDIO Aachen but Withdraw for Kur
Totilas Buzz at the 2014 CDI Kapellen
Matthias Rath Presents New Ride, Totilas, to the Press
Totilas Sold to Paul Schockemohle