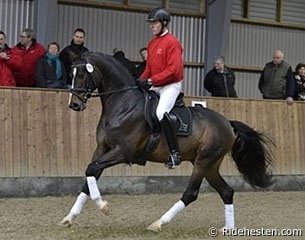 All six participating stallions passed with more than the required  minimum of 750 points.

The Danish warmblood society annually holds two stallion performance testings: a big one in the autumn and a smaller one in January for stallions that couldn't make it in the autumn testing, but needed the complete the testing before the upcoming licensing in March.