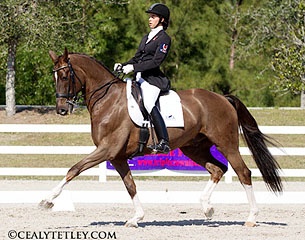 In the FEI Junior classes, Naima Moreira-Laliberté, 16, of Outremont, QC, won both the Team test (66.324%) and the Individual test (67.053%) riding her 12-year-old Hanoverian gelding Diamond (by Donnerhall x Werther).

The chestnut gelding came from Germany, where he was competed at S-level by Erika Szeicz in 2010 and 2011. Diamond is a full brother to Stefanie Schnell's stallion Donner Werther. Moreira-Laliberté is trained by Caroline Pépin and has been rocketed across the levels the past three years with the additional help of German trainer  Albrecht Heidemann. Naima has four horses to ride: her number one Diamond, a Lusitano Nao, a Dutch bred schoolmaster named Moving U and the 15-year old KWPN gelding Active Valentino (by Don Primaire), which was previously owned by Fiona James' Active Equestrian and ridden by British Nicola McGivern. In 2012 she competed Brittany Fraser's KWPN stallion Tolando (by Krack C) to win team gold at the 2012 North American Junior Riders Championships.

In Wellington Canadian Junior Rider Laurence Blais-Tétreault, also 16, of Montreal, QC, was second in both classes, scoring 65.595% in the Team test and 65.158% in the Individual riding Lowelas, her 13-year-old Trakehner gelding (by Hockey x Inster Graditz). Lowelas was previously owned by British 2010 WEG silver medallist Fiona Bigwood and he used to be a licensed breeding stallion before being sold as a competition horse.