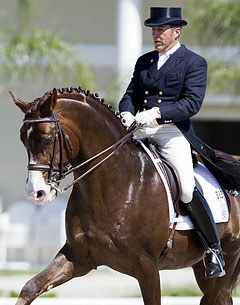 The 11-year old Swedish warmblood stallion Agastrofos has been sold to Swedish dressage sponsor and industrialist Antonia Ax:son Johnson, whose Lovsta Stutteri is a leading dressage stable and upcoming stallion station in Sweden.

Ax:son Johnson is an amateur dressage rider with no competition aspirations. At home in Sweden Antonia rides two Lusitanos but they were unable to travel to Florida because they tested positive to equine piroplasmosis.  In Florida Ax:son Johnson discovered Agastrofos (by Briar x Nocturne x Magini) at Caroline Roffman and Endel Ots' barn across the road and acquired the liver chestnut stallion to ride.

"He is a very cool, well behaved stallion with an extraordinary temperament and rideability. We have tried him for a month and now the deal is closed, he is coming with me home," Ax:son Johnson told Ridehesten.

The stallion made its claim to fame at FEI level in 2011 under Dr. Cesar Parra and Parra's student Kevin Kohmann introduced the stallion to Grand Prix. In 2012 Agastrofos was competed by Endel Ots, who became the reserve champion with him at the 2012 U.S. Developing Grand Prix Horse Championships.