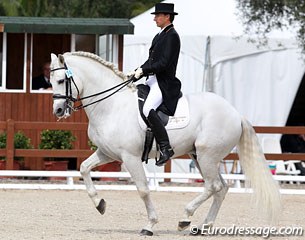 Jose Daniel Martin Dockx's young Grand Prix competitor Encanto XI has been sold to an American Adult Amateur in Wellington, Florida. Encanto XI (by Evento x Cantora) has been trained and competed by Martin Dockx since 2007. The pair has been one of Spain's most promising young international prospects.

Taking Reserve Champion Developing Horse as a 7-year old in 2009, Encanto went on to be Champion of Andalucia before moving up to Grand Prix. As a 9-year old he received scores to 67% in the international arena and traveled to Saumur with the Spanish delegation in 2011.

The now 11-year old stallion, bred by Hampton Green Farm, most recently took 2nd in the Grand Prix Special on the second week of competitin at the 2013 Sunshine Tour CDI in Vejer de la Frontera, Spain.

Encanto's new owner is a long-time resident of Wellington who rides a string of accomplished Grand Prix horses at her Homeland Stables. She plans to continue Encanto's career in the United States once the two of them have become accustomed to each other.