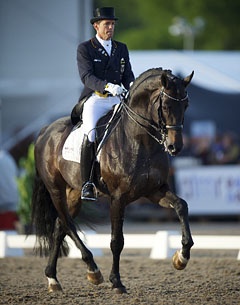 Christoph Koschel and his brand new Grand Prix super star Rubin Cortes made a splashing international debut at the 2013 CDI Arnhem on 31 May - 2 June 2013. The dashing duo landed fifth spot in the Grand Prix with 68.979% and rose in the kur to claim second place with 75.575% behind Dutch rival Edward Gal.

"In this sort of atmosphere, in front of such a great audience, there was something truly special about being able to achieve success up amongst the Dutch top riders," Koschel told Eurodressage. "Especially since Rubin Cortes and I were not necessarily expected to do so well, given it was only our second international appearance together."

Having ridden the Oldenburg licensed stallion Rubin Cortes in a total of eleven tests -- winning six of them -- Koschel feels the horse has never left him hanging at competitions.  "In some tests at the beginning he was maybe a little overzealous or did not know quite where to go but he has always shown incredible dedication and gives me a very good feeling when riding him," said the 2010 German WEG team silver medallist.

Entering the arena in Arnhem, Koschel noticed that Rubin Cortes was "on air". The pair was motivated to show what they have been working on together. "He is an incredible stallion, a positive mix of macho and buddy, always good-humored. And, you can feel just as well with him in the saddle, even in the atmospheres such as in Arnhem, this is where he comes particularly into play," said Koschel.

Just before the start of the Arnhem kur Koschel decided to ride the freestyle of his previous horses Donnperignon, so he had no opportunity to practice it with Rubin Cortes.

"I fell out of time with the music several times in the beginning and we had to stop and wait to catch up on it. That was probably the biggest challenge," Koschel admitted. "However, Rubin took it all in stride and I felt the music not only went well with him but also the heavy choreography worked amazingly well too."

Scoring a whopping 75.575% in the Kur, Koschel seems to be aboard a comeback king that could put the German rider back in the big time in the upcoming years. Rubin Cortes (by Rubin Royal x Calmiro) was the 2003 Oldenburg reserve licensing champion and was trained and competed to small tour level by German Hendrik Lochthowe. The stallion then spent a brief year with Edward Gal before the owner decided to give the ride on the impressive dark bay stallion to Koschel.

"I tried the stallion at Dressage Performance Lodbergen and liked him from the very first second," Koschel confessed. "It was not yet clear at this time whether Rubin could make his entry into the international Grand Prix scene, since he had not been introduced to Grand Prix, but his type, as well as his mentality, convinced me immediately that he would!"

Bred by Arsene Weiler in Luxembourg, Rubin Cortes is owned Dressage Performance Centre Lodbergen. The Swiss owner, Evelyne Wespe, contacted Koschel at the perfect time, as he had just sold Donnperignon to Danish Olympian Anna Kasprzak in order to financially support  his family and stable.  "Without sponsors it's difficult even when you're selling horses. We have to make a living. If I had the choice, I would have preferred to have kept Pepe, but he has found a great new owner," he said. 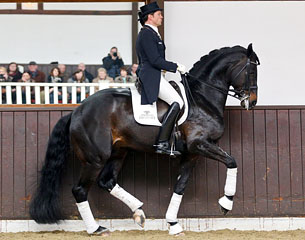 With the charming 11-year old Westfalian Rostropowitsch NRW (by Rockwell x Coriograf B) also in work, Koschel benefits from having two Grand Prix competition horses in training. “Rösti is now in the top 50 in the world rankings. He is a very relaxed horse, incredibly affectionate. However, there is a great characteristic that connects both: in that the more that is going on, or the greater the atmosphere, the more they put it!"

Rubin Cortes is currently putting his stallion duties on hold in favour of the sports career, but there is plenty of frozen semen available at Dressage Performance Lodbergen for breeders.

Christoph's aim with Rubin Cortes is to compete the stallion over the summer in a few selected CDI's and then focus on the World Cup season over the winter. "My overall goal is always to get good young horses to the top of our sport," Koschel stated. "Also my coaching gives me an awful lot of joy. I train several international riders from different nations and I would like to develop this further in the future."