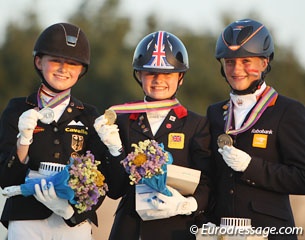 British Phoebe Peters wrote history today by being the first British pony rider to ever win an individual gold medal at the European Pony Championships. Furthermore, Peters broke a 15-year old streak of just Germans and Dutch clinging to the gold and covering the highest step of the podium. The 14-year old Peters reigned supreme in the individual test at the 2013 Pony Euros in Arezzo, Italy, on Saturday 27 July 2013 and referred German Semmieke Rothenberger to a second place and Dutch Lisanne Zoutendijk to a third.

The excitement of Peters' victory not only proved that the 2012 London Olympic Games definitely have a legacy for British dressage, but the young star's victory is also an incredible breath of fresh air for the sport as a podium place is no longer a German-Dutch exclusivity right. Before Peters it was Belgian Delphine Meiresonne who became the 1998 European Pony Champion in Le Touquet. Belgian Judith Godefroid did the same in 1993 and she was preceded by Swedish Karin Hedelin who won the individual title in 1987 in Saumur. 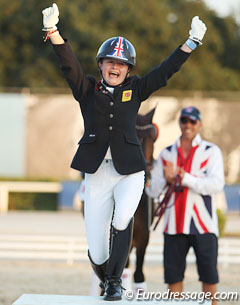 Trained by British team coach Peter Storr, Peters rode a very strong individual test on the 11-year old German Riding Pony SL Lucci (by Lukas x Bazar) with beautiful trot extensions and a super bouncy half pass right. There was a slight loss of rhythm in the left volte and Lucci  could have been a bit more relaxed in the collected walk, but the turn on the haunches was good. The pony did not do a square halt before the rein back. However, the canter work was exceptional: Lucci was always engaged from behind, well balanced in the counter canter and very pronounced in the simple changes. The final transition from trot to walk was quite late in the corner. Overall the contact with the bit was exemplary with Lucci always having the poll as highest point. The 14-year old Peters defies her age and rides with the confidence and focus on a 16-year old pony routinier. Phoebe was beaming with pride when she took the highest step on the podium and couldn't believe she had won gold. "I'm really ecstatic about the day. It hasn't sunk in yet," Peters told Eurodressage sharing her excitement for her pony which rose to the occasion today. "As as he's in the test he rises up and performs to the crowds," she added. "On the final centerline I felt it was good and I don't feel that often."

Phoebe said she will prepare for tomorrow's Kur to Music by "listening lots to my music and hope he (Lucci) will have another nice test. Ultimately it's just another test. I will go in there, enjoy it and give it what he deserves. I will ride him and do him justice." Peters also disclosed that she is chuffed being the first Brit to win pony gold and thanked her sponsors and team for their support. "I can't believe it, I'm so proud. I'm glad I could do it for my support team, my trainer and for Lucci. He deserves it." Phoebe will ride to music from Johnny English and Kung Fu Panda. "It's funny and lively. He's a cheeky pony and it will show off his strong points." 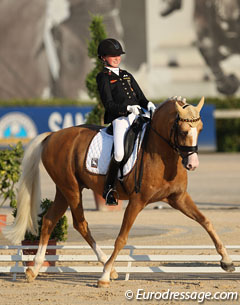 German Semmieke Rothenberger came back with a vengeance today and made sure her cheeky pony Deinhard B, a 15-year old German Riding Pony stallion by Dornik B x Golden Dancer, was focused on her. She travelled the ring by doing a combination of shoulders-in and travers to draw the pony's attention to her aids and not the surroundings. It did the trick as the golden coloured stallion was obedient throughout the test but Rothenberger was more physical in her riding compared to Peters. The 13-year old Semmieke rode a perfect entry and halt as well as a super shoulder in right. The pony could have shown a bit more elasticity in the half pass right. The trot extensions were ground covering. The collected walk was pure in rhythm but could have been more collected, the extended walk could have been a bit generous in overstep. Especially in trot, Deinhard B had to be more up in the bridle and have more uphill tendency. The canter tour was outstanding with fantastic self carriage, but a few simple changes could be executed even prettier. The final transition from canter to trot was difficult but the end halt was gorgeous. Semmieke scored 78.463 % and finished in silver medal position. The judges' marks ranged from 76.707% (Leyman) to 79.512% (Ebert). 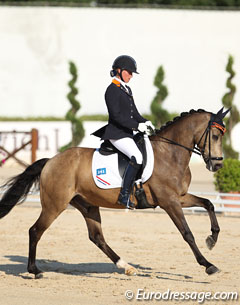 The Individual test was ridden late Saturday afternoon but the thermometer still indicated 36° C at the time. Dutch Lisanne Zoutendijk rode her 9-year old German Riding pony gelding Champ of Class round 6 PM and her pony seemed a bit affected by the heat. Maybe the judges were too as they gave a few weird high scores for a few not so nicely executed movements despite Zoutendijk's overall very strong ride. The halt at entry was rolling, with the pony putting himself into a square but stretched halt.  That movement still produced an average score of 7.7 on the board. Would a Polish or Hungarian rider get the same mark for the executing that movement the same way, one wonders? The trot work was fluent and confident, but there could have been a bit more bending in the half pass right. The rein back was mediocre with the pony getting crooked and hitting the fence (score 7.7). There were two mistakes in the rhythm in the extended trot on the long diagonal (7).  The collected and extended walk were very well ridden. In the canter the pony appeared a bit tired but remained concentrated on his rider. There was a loss of balance in the voltes on the centerline but the extended canters were oustanding. The contact with the bit and Champ of Class' chewing has improved tremendously compared to a year ago. Zoutendijk received 77.317% from the judges, which put her in bronze medal position. Her low score was 75.610% (Ebert), her high sore was 78.415% (Baarup).

Text and Photos by Astrid Appels - No reproduction allowed<

Eurodressage photographer Astrid Appels took photos of all combinations competing at the 2013 European Pony Championships. Contact us if you are interested in prints of your photos!