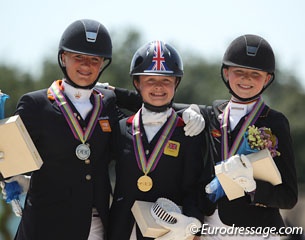 British pony rider Phoebe Peters became the undisputed 2013 European Pony Champion after adding the kur to music gold medal to her tally at the 2013 European Pony Championships in Arezzo, Italy, on Sunday 28 July 2013. Winning the Individual Test gold medal on Saturday, Peters and SL Lucci maintained their form and rode a world record score of 84.000% in the kur for another gold. Dutch Lisanne Zoutendijk captured the silver medal, German Semmieke Rothenberger earned the bronze.

The 14-year old Phoebe Peters wrote history this weekend on several levels. Great  Britain was back on the podium as a team and Peters was the first non-German/non-Dutch rider in fifteen years to claim an individual gold medal to that. On top of those achievements, Peters rode a pony kur world record score of 84.000% beating the previous record set by Semmieke Rothenberger on Deinhard B (83.917%) at the 2013 CDIO-PJYR Hagen in June. 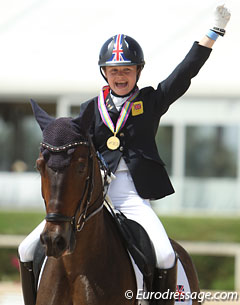 It was again boiling hot in Arezzo. With temperatures soaring to 37° C and on the fifth day of competition many ponies struggled to give a fresh impression in the freestyle. The same counted for Peters and her 11-year old German bred gelding SL Lucci (by Lukas x Bazar). Maybe the pair looked a tiny bit less juicy, it was still harmony pure with the perfect contact with the bit, a pony always working from behind, up in the bridle and a riding sitting quietly and independently in the saddle.

Riding to Johnny English and Kung Fu Panda music, Peters  rode wonderful trot half pass with good cross over. The collected walk could have been a bit clearer in rhythm but the extended walk was outstanding with super activity, rhythm and relaxation. The canter was in excellent balance but at times the pony could have been a bit more elastic. Phoebe rode the final centerline in an extended trot with one hand and executed a perfect, square halt.

The judges panel, which consisted of Ebert (GER), Hamoen (NED), Wessels (GER), Baarup (DEN), and Leyman (BEL),  were unanimous in putting Phoebe first and rewarded the test with 84.000%. "I'm extremely proud of Lucci," said the chuffed Peters. "He rose to the occasion. I didn't expect that result. It doesn't feel real." 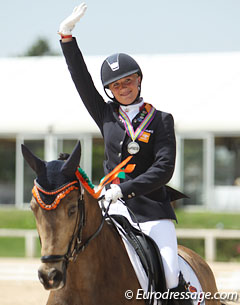 The 15-year old Dutch Lisanne Zoutendijk rode to a well-earned second placed on a radiant Champ of Class (by Champion de Luxe). The pair re-used the fitting, Italian inspired music to which Sanne Vos rode last year at the Europeans in Fontainebleau. The buckskin gelding was extremely obedient and nice in the hand. The trot work was prim and proper but it could have been a bit more collected overall. The extended walk needed more overtrack but had good relaxation, the walk pirouette lacked a bit of impulsion. The canter started out reall well but became slightly less bubbly towards the end of the test. The final extended trot was ground covering but a bit earthbound. In general, Zoutendijk rode a very strong test with Joost Peters' arranged music fitting the gaits of the pony. Her 80.775% score put her in silver medal position.

"It has a been a great show and everything went so well," said a shy Zoutendijk at the press conference. "I didn't expect to be in the medals and had hoped to be amongst the best 10. I'm thrilled to have won silver and bronze."

German Semmieke Rothenberger and her 15-year old German stallion Deinhard B (by Dornik B x Golden Dancer) slotted in third with a minimal difference in points compared to Zoutendijk. The 13-year old, highly decorated rider had her temperamental pony at his best on the final day of competition. Deinhard B was the most obedient and attentive to the rider's aids of all days, even though he could have had a bit more pezzazz. The trot work had good bending and flowed from one movement into the next, even though the big half passes could have been more regular. The collected walk was good, in the extended there could have been more overstep. The pony never had any issues with the collected or extended canter work nor with his balance in the counter canter on 10 meter voltes. Overall the pony needed to be more up in the bridle with more uphill tendency to score even higher. Riding to Sling Music Cast arranged music, Rothenberger scored 80.625% to win bronze.

"On the first day he didn't go so well and I had expected more," Rothenberger commented eloquently. "In the individual test we gave it our best and showed what we could do. Today it was very close. It always depends on the day."

Judge Susanne Baarup was full of praise of the level and quality of riding at the 2013 European Pony Championships. "It's been a fantastic championship. I enjoyed it so much," said Baarup. It's a privilege to be appointed to judge at such a championship. It were the small differences that separated the riders at the top. We all agreed on the top three. Lucci deserved every mark today and the German and Dutch rider were very close. They had perfect music and it was fantastic to look at such quality."

Overall the organisation of the 2013 European Pony Championships was outstanding with excellent arenas, a good atmosphere and perfect weather. The only point of criticism was the squaky, horrendous sound system that spooked not the ponies but more the spectators with sudden scratchy sounds and poor volume control.

Text and Photos by Astrid Appels - No reproduction allowed

Eurodressage photographer Astrid Appels took photos of all combinations competing at the 2013 European Pony Championships. Contact us if you are interested in prints of your photos!