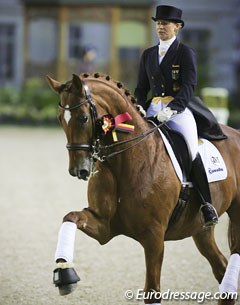 Nadine Capellmann has retired her 2008 Olympic mount Elvis from competition. The 17-year old Hanoverian gelding has been struggling with a hoof problem and has now been retired to the field.

The 1996 born Hanoverian is by Espri out of a Garibaldi dam. He has been one of Capellmann's most successful dressage horses. Nadine acquired the temperamental chestnut as a youngster in 2002 from Martin Schaudt but the same year she brought him to Heiner Schiergen because he had bucked her off twice.

Schiergen and Elvis qualified for the Bundeschampionate but did not compete in Warendorf. In 2004 the gelding made his S-level debut and Capellmann took over the ride at that time. That same year the pair won the 2004 Nurnberger Burgpokal Finals with the stunning 81,17% record score which still hasn't been broken.

Elvis made his debut at Grand Prix level in 2005 and one year later he enabled one of Capellmann's long-time dream, to ride at the 2006 World Equestrian Games in Nadine's home town Aachen. In May the combination already became the CDIO Aachen Grand Champions and at the WEG in the summer the pair won team gold with Germany and finished fourth in the Kur to Music Finals. 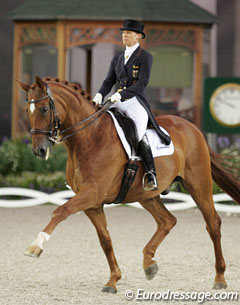 In 2007 the duo won team silver at the European Championships in Turin. In 2008 they were one of three riders to qualify on the German team at the Olympic Games in Hong Kong, where they won team gold.

After the coming of Totilas and the "modernizing of dressage" with more high quality combinations appearing on the scene, Capellmann and Elvis had a tougher time dealing with the competition and their scores dropped gradually. Their last show together was the 2012 CDI in Mechelen, Belgium. Their last publica appearance was a training demo with Klaus Balkenhol at the 2013 Equitana in Essen.

Elvis will now be retired and he can spend his time with his favourite playmate, shetlander Barbie.

"The spectators in Mechelen were the last who had seen Elvis in competition, and to my great joy he was in top form there," said Capellmann. "I'm very grateful to him for the big role he has played in my sports career and for the feeling he has given me as a rider. Working him daily meant much to me. My entire team is working hard at getting him top fit again and I'm looking forward to saddling him again and hack him out on the hill behind our farm."