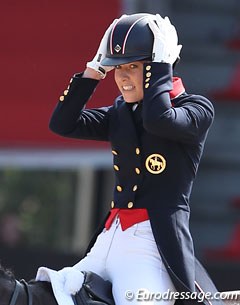 Since I've now been asked by two very knowledgable dressage experts ( you know who you are ...) how the deductions work, I thought maybe a lack of understanding might be more common, so here is a brief note reminding everyone!

A mistake in your test costs you 2 points. If you then go back and do the figure for a 10 you get the 10 points for the figure. The deduction comes off at the end of the test from your final score. The 2 points come off of each judge's final score, it does not matter how many judges there are, it's exactly the same penalty. It is the president however who must ring the mistake and has complete discretion on deciding that a mistake has taken place; sometimes it can be a gray area if a poorly performed figure is actually a mistake.

A second mistake however bumps  the penalty up to 6 points, or 1.25% in the GPS.

To the best of my knowledge the running scores shown at big events typically do not take account of deductions.

The only people who make no mistakes are those that do nothing!