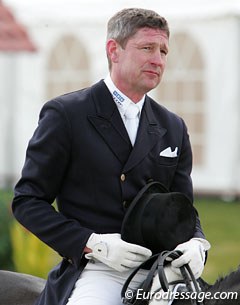 German Grand Prix rider Oliver Luze has decided to leave his employer, Gestut Fohlenhof, in Hassloch, Germany and is searching for a new yard in south Germany.

After calling it quits with his long-time employer Gestut Tannenhof in December 2008, Luze started a diaspora through Germany moving from one yard to the other. From Tannenhof he went to Helenenhof, but in November 2010 he left that farm. He initially decided to rent stalls at Dieter Mehrens' stable in Sievershütte, Germany, but then quickly found a new base at the Heicke family's Fohlenhof.

In an interview with Reiterjournal, Luze cited irreconcilable difference as the reason for his split with the Heicke family especially after the mare was taken away from him.

"I love sourth Germany and would prefer to stay here," he told Reiterjournal.