David Stickland: Who's Afraid of the Piaffe Coefficient? 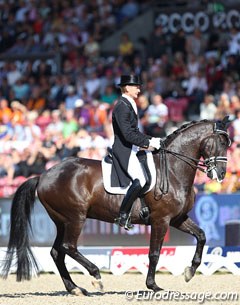 Our guest columnist of the week is regular contributor David Stickland of Global Dressage Analytics who weighs in on the consequences the new piaffe coefficient will have on the judging of the Grand Prix and Special in 2014.  Stickland phrases the new coefficient as a " relatively simple change" which will have "a significant effect on the qualities that riders will need to bring out in their horses."

Who's Afraid of the Piaffe Coefficient?

The FEI announced last week the new Grand prix level tests. No changes for the Freestyle yet, though perhaps we will get the Katrina Wüst degree of difficulty formula sometime, but a change of coefficient for the piaffe in both the Grand Prix and the Grand Prix Special. After 1 January 2014 every piaffe in these tests will have coefficient of 2. This relatively simple change will have a significant effect on the qualities that riders will need to bring out in their horses.

Does it make much difference? Well yes! Let's take a look at the team ranking at the 2013 European Dressage Championships in Herning. The top three teams were so close at Herning that this change of coefficient would have rearranged the team medals entirely! The 2013 team results (gold GER 234.65, silver NED 233.96, bronze GBR 233.53) would have become (Gold NED 235.65, silver GER 233.54, bronze GBR 232.99) if the 2014 coefficients had been applied. This is effectively a combined shift of almost 0.9% per competitor in net favor of Holland over Germany. Essentially the top three Dutch combinations each receive a boost (Undercover getting an almost 1% gain) from this rule-change and the top-3 German combinations a small negative swing. Valegro’s would score slightly higher with the change while Uthopia would have taken a big hit at Herning (a 0.9% loss).

In evaluating the effect on a competition you have to go beyond the simple addition of coefficients to see what will happen, that tells you for how many points can be awarded for each movement type. What is also interesting is the effect on the ranking, or the spread in scores across the event for different riders and horses. Put simply if everyone receives the same score for a figure, then their final score gets those points but it has no effect on the ranking – it is the figures where there is a wide range of scores assigned that change the ranking.

So in the figure below I show the effect on the ranking of each movement-type using the Herning data evaluated with the 2013 and with the 2014, coefficients. I have grouped the various paces into columns and separated the collective marks between Rider (Aids) and Horse (Paces, Impulsion, Submission), the Halt includes the Rein-Back. 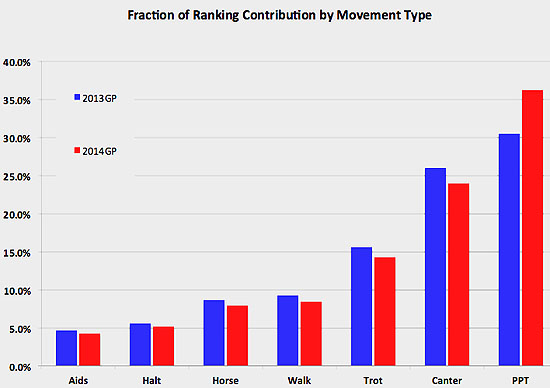 You see that with the 2013 coefficients the combined PPT (Passage, Piaffe and Transitions) scores contributed 30% of the ranking while with the 2014 coefficients that becomes 36%. The effect for the Grand Prix Special is similar, changing the contribution of PPT from 34% to almost 40%. Since the PPT contribution goes up, the other movement types must go down slightly as you see in this figure. One reason the PPT becomes so much more important in ranking of the Special compared to the GP, is because only the top riders go through to the Special and they typically do not make (so often) mistakes in the changes, and thus the Passage-Piaffe work becomes the big separator for these riders. (But even from the raw score point of view, 36% of the total Special possible score comes from PPT) 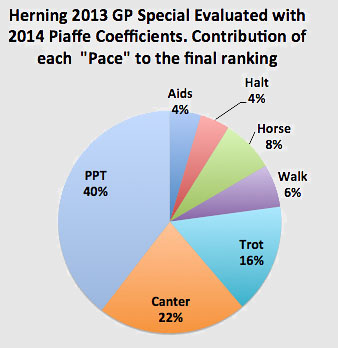 So, how will it affect you? The easy way to get a first estimate is to do the following calculation:

Actually you will gain or lose 3/5 times this difference in your final % mark so in the above example -0.5x3/5 or -0.3%, the exercise is left to the student.

In GDA we will be implementing the 2014 tests in the next weeks so you will be able to see in more detail what scope you have for improvement and how important this will be for you. But the evidence from Herning is that we have a very tight competition at the top of the field and every fraction of a percent counts. Undoubtedly riders will need to polish even more their piaffe work in the future – which is what I think the FEI Dressage Committee wanted!