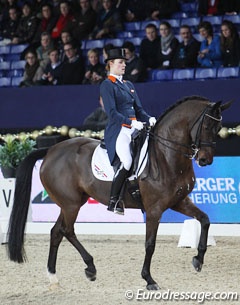 "I love her," Morgan told Eurodressage. "She's great to ride! Everything is so nice on her, especially her amazing piaffe. I'm looking forward to the season with her."

Vitana V is a 2002 born Dutch warmblood mare by Donnerhall x Hemmingway x Zuidhorn. This elite sports' mare sucessfully carried out a double duty of brood and sports mare. She foaled the Dutch warmblood licensed stallion Cennin and has been trained to Grand Prix level by Stephanie Peters. The pair won the bronze medal at the 2012 Dutch Indoor Dressage Championships.

Vitana V was moved into training with Madeleine Witte-Vrees at the end of 2013 as a sales horse. The duo showed successfully at international competitions such as the 2013 CDI Mechelen and 2014 CDI-W Amsterdam. Morgan Barbançon's trainer Andreas Helgstrand acquired half ownership of the mare by the end of December 2013-begin January 2014.

Morgan Barbançon was a member of the Spanish Olympic team at the 2012 Games in London. Last year she has been campaigning Heimliche Liebe (by Hohenstein) as her top horse Painted Black got injured right after the Games. With her second GP mount Heimliche Liebe she will compete at the 2014 CDI Doha international invitational next week.

Morgan's top horse, the 17-year old Painted Black (by Gribaldi), is fit again but the Barbançon family has decided to save the experienced Grand Prix schoolmaster and he will only perform in the Spanish team selection trials in June and July for the 2014 World Equestrian Games.

"First I would like to get to know Vitana better before I make exact plans for the season," Morgan explained. "I will show 'Vi' at two national shows in Denmark to get my two 64% qualification scores in for international competition, but right now I'm focusing on competing Princess (Heimliche Liebe) in Doha."