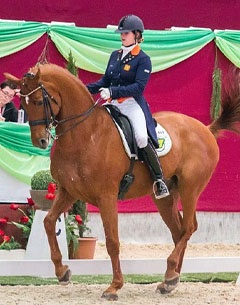 Due to the sale of Madeleine Witte-Vrees' Vitana V, which was scheduled to compete on the Dutch team at the 2014 CDIO Vidauban Nations' Cup on 28 February - 2 March, Dana van Lierop has been called Dutch team reserve.

The 2012 European junior rider champion made her Under 25 Grand Prix debut this year on the 17-year old schoolmaster Wunschtraum (by Warkant) and is scheduled to compete in the Under 25 classes in Vidauban.

Wunschtraum was previously competed by Holga Finken and spent a short stint with Adelinde Cornelissen in The Netherlands The chestnut gelding was never successful under the Dutch rider and moved back to his owner in Austria, who gave the ride to Van Lierop this year.

Dutch team coach Wim Ernes has decided to name Van Lierop team reserve for the Nations' Cup, which would imply Dana's senior Grand Prix debut, but the now young rider will only be added to the team in case a team score of the three already listed riders proves insufficient.

The Dutch team in Vidauban will consist of Tommie Visser on Vingino (by Polansky), Laurens van Lieren on Ulysses la Haya (by Gribaldi) and Diederik van Silfhout on Arlando (by Paddox).