What's in a Name: A Spider Bite

Interviews
What's In a Name? 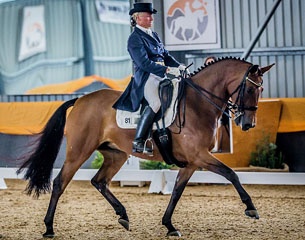 Surviving a spider bite as a yearling, the aptly named Australian warmblood mare A Spider Bite recently competed in her very first international Prix St Georges class at the 2014 CDI Orange in Australia on 14 - 16 February 2014). Breeder, rider and co-owner Sally Evans describes her as a a little fighter.

“She was bitten very early on and the vet even thought it may have been a white tail spider,” Sally Evans explained. “They are a horrid spider and the bite can cause lots of ongoing pain and suffering, sometimes for years. Luckily for us, after the vet treated her, she healed and there is not even a mark where that nasty spider bit her."

Bred by Sally and her husband, A Spider Bite is by their stallion A'Seduction, a horse that Sally trained and competed right through to Grand Prix, out of the Grand Prix mare Atalanta.

With a 61.81% in her first Prix St Georges, Sally told Eurodressage that her first big test with “A Spider bite” was a bit daunting to say the least and believes that she was a bit nervous of putting the horse under this pressure. “However, our finishing in the top 6 in the Advanced and 5th in the freestyle was a big thrill for us, and Sue Macdonald, her co-owner, and I were so pleased with her," she said. Evans has set Grand Prix as goal for A Spider Bite, who is known as CC in the stable.  The mare got her nick-name after the two people that gave the couple the opportunity to use their Grand Prix mare, Atalanta. "Their names were Chris and Carolyn. Actually, this all started when I worked in the racing industry, for a trainer, he would buy a horse and give it a name of the people he bought it from," she said.

A very pretty picturebook-like foal, A Spider Bite was drop dead gorgeous and Sally can still imagine the mischievous moments of each day that CC would get herself into. “Her dam was a very big fat lady -- sorry Tally, but you were pretty big -- and was also very bossy at meal times and she would not let CC have even the smallest nibble of her food. The other foals had mums that would share their meals with their foals, but poor CC would have to stand in the paddock by herself, pretending to be very much ok with this idea of her mum’s, but I’m sure she was very jealous of the other foals and also felt left out at this time, but she would put that behind her and when all were finished eating, she would play again with her mum or the other foals.” 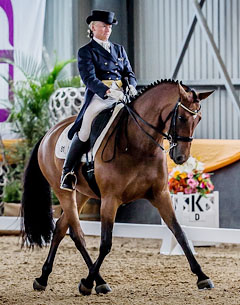 Nowadays, CC is just a scream and Sallt believes she would be the OH&S girl of the office, always making sure all areas are safe and ready to work in. “She is also very meticulous with almost all that she does, very particular. As I ride her and she is progressing through to the FEI level, she seems to have her own ways to help me to create cues for her, like the preparation of things you do to prepare for tempi flying changes. She is like the perfect office girl, very pretty, a little crazy at parties, but when it comes to work, she is into it!”

Now earning her eighth championship rug, Sally feels that the bay mare is truly a champion in their eyes giving both owners a lot of joy! “Sue Macdonald has had it pretty hard lately in life. With breast cancer in her thirties, once back riding a freak accident left her with a broken back, crushed vertebrae," Evans explained. "Then Cancer again, losing a kidney, chemo, then more cancer with lung cancer and even more chemo, but Sue is all over it, winning not only with this, but with our beautiful mare as well."