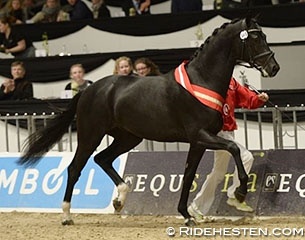 Six 3-year old colts were selected for the premium ring - two jumpers and four dressage stallions. The black Galaxy Win T, bred by A. Toonen Arts in The Netherlands and owned by Andreas Helgstrand in partnership with Nico Witte, received the champion sash.

"This is a masculine, long-legged stallion with a lovely, open frame. His movements are powerful, roomy and supple with great self-carriage," said breeding advisor Karina Christiansen.

A total of 22 stallions were approved, 21 3-year-olds and one 4-year-old. The complete list of the 15 dressage approved stallions includes:

Of the 15 licensed dressage stallions, three are owned by Andreas Helgstrand and four by Blue Hors stud

"Danish Warmblood is a small breeding society, and we will never be able to compete on the number of horses. When it comes to quality though, we are more than competitive - mainly due to our selection system, said breeding advisor Karina Christiansen. 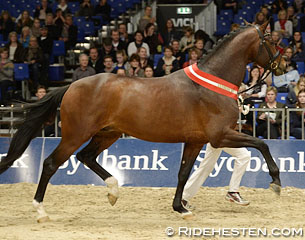 In Denmark, the 4-year old licensed colts have to present themselves again one year after their initial licensing. Their performance test results are discussed and the stallions re-inspected under saddle by the licensing committee in order for them to obtain definite approval for the Danish warmblood society.

Fifteen 4-year-old stallions were licensed for life and will be ready for the upcoming covering season. As a result of his type and his gaits Atterupgaards Seebach (by Sandro Hit x Caprimond) secured the title of 4-year old licensing champion. The judges described the masculine stallion as ”extraordinarily expressive and elegant dressage model with a well-functioning topline and a very roomy, balanced and uphill canter with great self-carriage.”

Nine 5-year-old and older stallions were approved, four of them dressage bred. Most of the stallions are owned by foreign stallions keepers, and several of them have already proven their value in breeding.