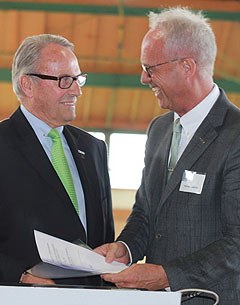 The International Dressage Trainers Club (IDTC) has become the fifth of the former FEI Associate Members to sign a Memorandum of Understanding (MOU) with the FEI.

The IDTC, which specialises in raising the level of Dressage training worldwide with a special focus on countries where Dressage is a developing sport, was founded in 1984 by Herman Duckek (GER), who remained President until his death in 2000.

The IDTC now has over 120 member trainers based around the world working with senior and young athletes competing internationally at Grand Prix level and in pony, junior and young rider championships.

The MOU was ratified during yesterday’s International Dressage Trainers Club Annual Members Meeting, which was held at the headquarters of the German Equestrian Federation and German Olympic Committee for Equestrian Sports (DOKR) in Warendorf.

“The FEI has worked closely with the International Dressage Trainers Club for over 30 years”, said Trond Asmyr, FEI Director of Dressage and Para-Equestrian Dressage. “We’re now looking forward to taking this longstanding collaboration to the next level at a time when Dressage is rapidly increasing in popularity with athletes and spectators alike around the world.”

"This agreement formalises the relationship between our organisation and the FEI and recognises the importance of the training community in the development of our sport. I look forward to a future of cooperation and support between the two organisations."