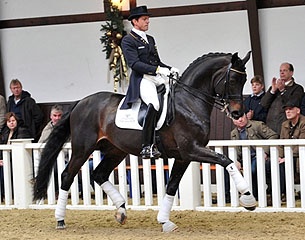 The reserve Oldenburg licensing champion and Grand Prix level trained and competed stallion Rubin Cortes has been sold as a Grand Prix schoolmaster to Barbara Bertschinger of Gestut Sonnenberg based near Zurich, Switzerland.

Rubin Cortes is bred by Arsene Weiler in Luxembourg and was previously owned by Dressurpferde Leistungszentrum Lodbergen GmbH. The dark bay (by Rubin Royal x Calmiro) was the 2003 Oldenburg reserve licensing champion and trained and competed to small tour level by German Hendrik Lochthowe.

The stallion spent a brief year with Edward Gal before the owner decided to give the ride on the impressive dark bay stallion to Christoph Koschel in November 2012.  Koschel made a successful international debut with the stallion at the CDI Arnhem in May 2013, landing a fifth place in the Grand Prix with 68.979% and a second with 75.575% in the kur. The pair also competed at the CDI's in Lingen, Hamburg and Arezzo.

The amateur FEI level dressage rider Barbara Bertschinger is celebrating her 50th birthday on Monday 28 April 2014 and indirectly treated herself with a special present, Rubin Cortes. Bertschinger was looking for a suitable horse that could take her from Prix St Georges level to Grand Prix and found the perfect match in the dark bay stallion.

"He's a dream. He's absolutely excellent. He's very light to ride and not a stallion at all under saddle," Bertschinger told Eurodressage. "He is a real personality and I know he will be able to bring me to Grand Prix and get me introduced to international competition."

Rubin Cortes will no longer stand at stud, although frozen semen is still available. He will stay in training at Koschel's yard in Hagen, Germany, to which Barbara commutes every two weeks. The Swiss FEI rider got to know Christoph when she bought Dream of Nymphenburg (by Dark Fire x Disco Prince) through him half a year ago and the trainer-student combination clicked.

"I have been training Barbara for six months and when she asked me to find a good schoolmaster, Rubin Cortes was the first horse to come to my mind," Koschel stated. "Already during the first try-out we knew that this would be a perfect match. I'm very happy that I will be able to train this pair to Grand Prix."

Bertschinger runs her own private dressage stable and brood farm Gestut Sonnenberg in Aeugst am Albis, Switzerland, and trains and competes her own talented horses, such as Sonnenbergs Solisco (by Sancisco x Brentano II) and Extra Klasse (by Landjuwel Gold x Ex Libris). With the latter she became sixth in the 2013 Swiss Amateur Cup.

"My goal is to ride Grand Prix and I'm determined to be an intenational competitor," she said. "In May or June I will ride Extra Klasse at some national shows in Germany, as there are more possibilities in this country. For the winter I'm planning to take all my show horses, including Rubin Cortes, to Wellington, Florida, for the international show circuit there."