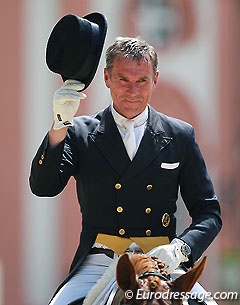 Bonhomme's owner and managing director Rebecca Gutman announced that it is no longer possible to co-operatei with Finken in the future.

"Rebecca regrets this decision, but is even more happy that dressage rider Isabel Bache and jumper rider Bastian Freese will remain and strengthen the Gestut Bonhomme team," said the press officer in a statement.

Finken was assigned the position of head trainer of the dressage horses at Gestut Bonhomme in January 2014. He brought along his partner, Austrian Saskia Lieben-Seutter and assistant trainer Isabel Bache to Bonhomme to build a dressage team there.