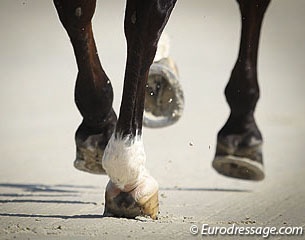 New research in Animal Genetics reveals that a horse's gait, an attribute central to its importance to humans, is influenced by a genetic mutation spread by humans across the world.

The team, led by Dr. Leif Andersson from the Swedish University of Agricultural Sciences, explored the distribution of a mutation in the DMRT3 gene which affects the gait of horses, known as the 'gait keeper.'

"All over the world, horses have been used for everyday transportation, in military settings, cattle herding and agricultural power, pulling carriages and carts, pleasure riding or racing," said Dr. Andersson. "Over the centuries, horse populations and breeds have been shaped by humans based on the different purposes for which the animals were used."

The DMRT3 gene is central to the utility of horses to humans, as it controls a range of gaits as well as pace. From racing to pleasure riding, many species have been bred to encourage smoothness of gait.

"For example, the Paso Fino is a breed from Latin America in which the frequency of the 'gait keeper' mutation is nearly 100%. It is claimed that the Paso Fino gait is so smooth that you can have a glass of wine in your hand without letting it spill," said Dr. Andersson.

The team analyzed 4,396 horses from 141 breeds around the world and found that the 'gait keeper' mutation is spread across Eurasia from Japan in the East, to the British Isles in West, on Iceland, in both South and North America, and also in breeds from South Africa.

"Humans have spread this mutation across the world primarily because horses carrying this mutation are able to provide a very smooth ride, in some breeds referred to as a running walk," said Dr. Andersson. "During such ambling gaits the horse has at least one foot on the ground that means that the vertical movement of the rider is minimal."