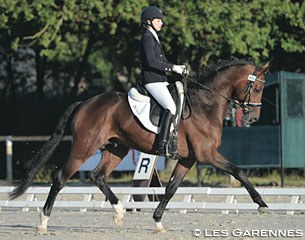 The 4-year old Quaterdance, the 5-year old Kojak, and the 6-year old Hermes de Hus were the grand champions at the 2014 French Young Horse Championships, which took place in Saumur, France, on 26 - 28 September 2014 co-inciding with the indoor CDI Saumur.  The French Young horse nationals are annually a well attended event with primarily German bred horses taking the spotlight.

The 4-year old division was won by Belgian rider Amandine Prevost aboard the bay Quaterdance (by Quaterback x Expose), bred and owned by S.A. Montaigu. Prevost and Quaterdance won both rounds of the Championships, the first counting for a coefficient of 0.4 and the second final round for a coefficient of 2. They scored 88.17 and 91.00 to finish on a winning total of 90.528%. The silver medal went to Nuno Chaveiro on the Hanoverian bred Sultan des Paluds (by Soliman de Hus x De Niro). He was second twice with 86.83% and 85.80%. Jessica Michel and the KWPN bred Fusion de Hus (by Rubiquil x Krack C) landed the bronze after two fourth places with 83.50% and 84.80%. 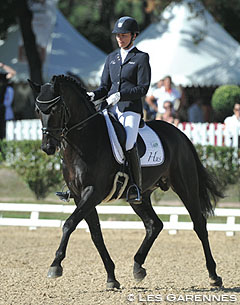 In the 5-year old division, French representatives at the World Young Horse Championships in Verden and last year's French 4-year old champions, Clemence Cathala and the Trakehner Kojak (by Grand Passion x Kennedy) bested the field and took the title in their division with 80.000% and 88.200%, totalling 87.130%.  Gildas Flament and the Hanoverian Al Capone (by Belissimo M x Lauries Crusador xx) were the runners-up with 84.50 and 82.40%. Myriam Kysters and the Dutch bred Estillio (by Rubiquil x May Sherif) were seventh in the first round (78.33%) but climbed to third place in the finals round (79.40%) to end up with bronze.

Jessica Michel and Xavier Marie's Hanoverian Hermes de Hus (by Hotline x Rohdiamant) won the 6-year old division after a third place in the first round (84.17%) and a victory in the finals' round (83.000). A French champion in 2013, the black Hermes de Hus totalled 83.106% for the gold. French Young Rider Corentin Pottier led the Dutch bred mare Dewi M (by Sandro Hit x Jazz) to silver with an 81.00 and 82.00% score. Sylvie Desfrenne and the Hanoverian mare Romina (by Royal Blend x Weltmeyer) placed fifth in round A (82.67%) and third in the finals (80.40%) which brought their total score of 80.606% and the bronze medal.