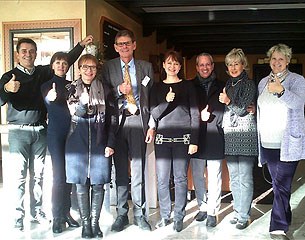 Thirteen international dressage judges got promoted to a higher star level by successfully completing the exams held during the 2014 CDI-W Stuttgart in Germany on 20 - 23 November 2014.

Judges from all over the world, including Canada, U.S.A, India and a large group of European judges, attended the exam which took four days during the World Cup qualifier in Stuttgart.

The examination included a written exam with eleven questions about the theory and rules of dressage judging, followed by a day of shadow judging of 15 riders competing in the Stuttgart Grand Prix. The candidates had to do a personal interview with course directors Stephen Clarke and Dieter Schule on Sunday morning.

"The group was divided into two by draw. Seven candidates judged the CDI-W on Friday and eight judged the CDI4* on Saturday," Estonian judge Eva-Maria Vint-Warmington told Eurodressage. "It was exciting to 'judge' such top level performances and to see the warm support from the whole Stuttgart CDI ground jury."