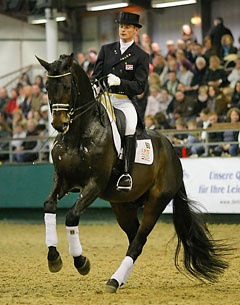 A 50% ownership share in the Elite Trakehner stallion Easy Game has been sold to Belgium. The Belgian based Dutch rider Veronique Swagemakers and her partners have acquired half ownership in the stallion.

The 11-year old East Game is by Gribaldi out of Evita XII (by Schwadroneur x Cannon Row xx). He has two licensed sons, Sir Easy (out of a Tuareg dam) and the premium stallion and 2010 licensing reserve champion Millennium (out of a Ravel dam), who was the big star of the 2014 German Stallion Licensings having sired no less than two licensing champions (Trakehner, Oldenburg) and numerous premium stallions.

Easy Game is still owned for 50% by Dutch Joop van Uytert and German Petra Wilm, but the stallion moved to Swagemakers' yard in Lommel, Belgium, a few weeks ago.

The bay stallion was initially started by Jan Lens and then the ride was taken over Theo Hanzon. John Tyssen has most recently been training him for quite some time. Easy Game is schooling at Grand Prix level.

"I tried him out a few times at Joop van Uytert's and I really connected with the stallion," Swagemakers told Eurodressage. "It is our goal to continue to train him for Grand Prix. He's a very talented horse, sensitive and with much willingness to work. I think he's a reall addition to the breeding world, also here in Belgium, and you can see that in his offspring."

Swagemakers is a veterinarian by profession and manages the training centre and stallion station, Team Swedon.