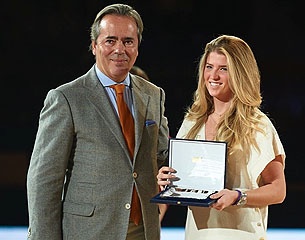 Morgan Barbançon Mestre was honoured at the 2014 Madrid Horse Show on 29 November 2014 for being the best performing Spanish dressage rider at the 2014 World Equestrian Games in Caen, France, in August.

Barbançon and her 17-year old Dutch warmblood stallion Painted Black (by Gribaldi x Ferro) were the top scoring Spaniards, bringing the Spanish team to a fifth place in the nations' ranking and individually they finished 15th in the Kur to Music finals.

Morgan received a special trophy in recognition of her achievements from the organizers of the Madrid Horse Week CSI/CDI competition together with the Spanish chef d'equipe. The 22-year old was also the youngest dressage member on the team. The award ceremony featured a presentation of Morgan's career achievements, followed by a video montage of Morgan and Painted Black in the show ring.

"It was the first time the award was handed out," Barbançon told Eurodressage. "It was such an honour to get this prize, especially in my home countr Spain."

While the experienced Painted Black has been given a break after the 2014 World Equestrian Games, Morgan has been focusing on her second ride, the 12-year old Dutch mare Vitana V (by Donnerhall x Hemmingway). The girl duo has clearly gelled this autumn and have been competing at Zandhoven, Odense, Stuttgart and Roosendaal the past few months with excellent 70% + scores. 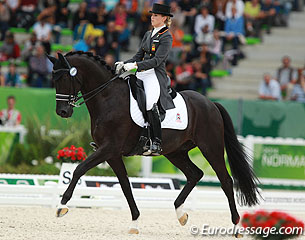 "I don't have fixed plans yet for 2015, but hopefully I can ride at Las Vegas and Aachen," said Morgan. "Vitana might be ready for the 2015 European Championships. With Sir Donnerhall II I aim to start in the Under 25 division."

Morgan has been studying International Business and Management at the Fontys University of Applied Sciences in Eindhoven, The Netherlands and commutes between her house near Erp (NED) and her boyfriend Nicolas Philippaerts' home in Belgium.  Her horses are located at Stable Korenbloem in Weert, The Netherlands, where she trains with her coach, Danish Andreas Helgstrand, via a professional web cam system.