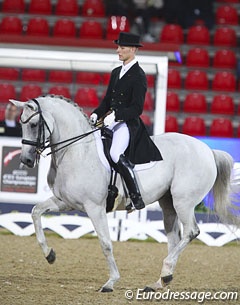 The 13-year old Danish warmblood mare Donna Silver (by Don Schufro x Willemoes) has been sold to Danish young rider Rose Marie Bang Henriksen. The grey Donna Silver was first competed at FEI level by Bettina Laisbo and then sold to Italian Silvia Rizzo. Daniel Bachmann trained her for Rizzo up to Grand Prix level but Silvia then gave the ride on the mare to Dutch Hans Peter Minderhoud in 2013. Donna Silver sold to South African Chere Burger as 2014 World Equestrian Games hopeful, but Burger qualified with her Friesian Anders instead. Donna Silver has now been sold as a schoolmaster for 18-year old Bang Henriksen, who is the daughter of Danish stallion owner Lone Boeg Henriksen (Furstenball, Hoftanz, Dragon Hill). The mare, who is a highly decorated gold medal mare for the Danish warmblood society, will also be used as broodmare for embryotransfer.

Talk about expanding horizons beyond the horse! Danish Grand Prix rider Anna Kasprzak is taking an active interest in her mom Hanni Toosbuy Kasprzak's multinational Ecco Shoes. The WEG team rider has been learning how to stitch shoes as well as sell the shoes in an Ecco store at home.

Kasprzak recently celebrated her 25th birthday, by the way, and Klaus Balkenhol blew out 75 candles on his birthday cake!

Fairytale, the 2013 KWPN Spring Stallion Performance Test winner, has been withdrawn from competing in the mandatory KWPN Stallion Competition. Under Diederik van Silfhout, the black Lord Leatherdale x Negro offspring performed below par at the first leg at the end of November and the horse proved unsound. Though he will fully recover from the injury, Fairytale is sidelined for the entire Stallion Competition. 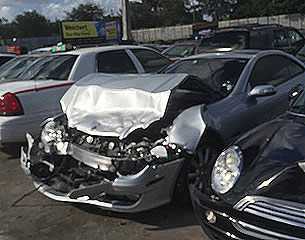 American dressage Matt Johnson, who represented the U.S. at the 2014 World Young Horse Championships in Verden aboard Petersborg Qasanova, was in a severe car accident on Monday 1 December 2014. The entire front of his car was totalled but Johnson fortunately came out unscathed. "I'm lucky to have survived, just minor bruises," he told Eurodressage. "God was watching over me."

Swedish Young Rider Emma Jonsson has acquired the 8-year old Dutch warmblood gelding Santo Domingo (by Samba Hit II x Flemmingh) from owner and rider Emmelie Scholtens and his breeder, the Oomen family. A student of Jan Brink's, Emma has been competing at the international young riders circuit with Lifemusic and Fleur.  Santo Domingo competed at the 2012 World Young Horse Championships in Verden, where he finished 7th in the Finals, and is now showing at small tour level.

The International Dressage Trainers Club has joined the European Equestrian Federation. "The EEF is becoming increasingly influential in the development of equestrian sport throughout Europe and beyond. The International Dressage Trainers Club looks forward to making a positive contribution in this process," said IDTC chair David Hunt. "The EEF has several initiatives that interface with the FEI in various ways and the IDTC wants to participate with any group which is trying to push the dressage peanut forward," IDTC secretary Linda Keenan added. 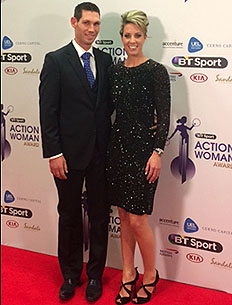 Charlotte Dujardin has scored her second major award of the season as she was named BT Sport Action Woman of the Year 2014. Charlotte won the public vote following her staggering season where she became the first British rider to claim the World Cup title and then went on to take double individual gold and team silver at the World Equestrian Games. Charlotte looked stunning on arrival in a Jenny Packham black dress flanked by fiancé Dean Wyatt Golding and her 'rock' Ian Cast after a busy day of media work with the London Metropolitan Police.

German Olympic sport societies are dropping in members and the same goes for the German Equestrian Federation. In 2014 it has dropped 1.67% in members (11,823 members less), how having 697,067 members in total. The German FN is the 8th biggest Olympic Sport Society in Germany (the biggest ones being soccer, gymnastics and tennis). The biggest drop in the FN was noted in the youth category up to 18-year old.

The 2016 European Junior and Young Riders Championships have been allocated by the FEI Bureau to its sole bidder, Madrid!