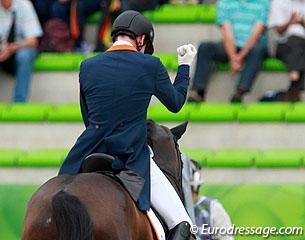 Last week was one of discouragement for lovers of high performance dressage. The 2014 FEI General Assembly took place and surprise decisions to the disadvantage of the sport revealed themselves post-factum like a jack-in-a-box.

To a majority of dressage aficionados, these decisions are literally a Nightmare before Christmas. While the FEI Dressage Committee publishes "minutes" based on their in-person or conference call meetings, hardly any relevant information is actually shared with the public. The dressage brain centre considers their proposals "confidential" and most often, after the deed is done, we find out in which direction the moguls are pushing the sport.

With each day passing post-GA a new rule change for dressage was disclosed and they turned my mood as grey, bleak and depressing as the weather in Europe! "We have to work on the popularity of dressage", "dressage has a stuffy image", "dressage does not appear on television;" these are the ridiculous slogans that seems to be the modus operandi for rule-changing in the FEI dressage committee. The preservation of the purity (and beauty) of the sport seems irrelevant in their decision making process.

This year at least two riders get knocked unconscious by their wild steeds during a horse inspection. Yet protective headgear is considered unnecessary for that phase of the competition. Despite the fact that there was  "a healthy debate on a proposed modification to the FEI Dressage Rules requiring children, pony riders, juniors and young riders to wear protective headgear at the horse inspection," as stated in the FEI press release, "following feedback from the German and Dutch Federations, the Chair of the Dressage Committee Frank Kemperman withdrew the proposal."

The next lamentable rule change that took place is a new system for the draw for the Grand Prix at CDIO's and Championships. The draw will no longer be random but based on a "World Team Ranking List," putting the more famous and successful riders and nations at a clear advantage. It allows for the higher ranked riders to ride on the second day of competition in case the Grand Prix is split over two days. By passing this rule the FEI Dressage Committee has pushed the door wide open to an unlevel field of play, preventing fair judging and once again fostering the power of the leading dressage nations. Developing dressage countries will continue their struggle and money wasting efforts at claiming a voice or authority in this sport.

The new rule reads: "For Championships on Grand Prix level and Games on Grand Prix level, the starting order of the teams will be drawn in groups of five, based on FEI World Team Ranking list, or if not existing, by adding up the points of the participating team athletes on the FEI Individual World Ranking list." It further reads, "when the Competition is held over two (2) days the individual starters shall be drawn in the reverse order of the World Dressage Ranking list and in two (2) groups the highest placed Athletes drawn on the second day."

The Dutch Equestrian Federation has taken pride in having won this yearlong tug-and-pull game to get their riders drawn into favourable positions, as stated in a news article on De Hoefslag. I'm sure Denmark, Great Britain and Germany didn't complain either. The leading dressage nations are not thinking about bettering the sport, but getting the groove in their own, already comfortable seats much deeper in the future.

It is mind-blowing that scientific and statistic evidence on judging is completely disregarded in favour of a nationalistic draw! Researchers such as David Stickland and Inga Wolframm have proven over and over again that riders starting later or last in a class (or on a second day) have a clear advantage to their fellow competitors, because of a judge's natural and memory influenced bias. I find it unbelievable that a random draw is not the standard when it comes to determining a honest order of go, celebrating fairplay.

The latest hallucination in the pipeline to "improve" the sport is shortening the Grand Prix test! In 2012 a brand new shortened Grand Prix Special was created for the Olympics to comply to television media pressure (it is said). As soon as the Games were over the riders themselves decided to resort back to the old, longer Special, which was nicer to ride.  How paradoxical does it sound now that the Grand Prix has to be shortened! Even more amazingly the IDRC members is supporting the proposition. Secretary-general Wayne Channon told Eurodressage that he "would support getting rid of the the halt and reinback." The former British team rider believes "they interrupt the flow of the test and are not that interesting for the public (..) We have a halt at the end which could be weighted more to compensate."

The rein back was re-inserted in the Grand Prix test a decade ago because there was a need for submission to be tested even more with some horses refusing to halt properly at X (and still scoring ridiculous marks, remember!). For believers of classical equitation the reinback is "the touchstone of submission" and a halt is certainly also proof of that. Tense horses refuse to stand still, they dive deep with their heads (also in the rein back as for many LDR trained horses it is similar to the aid for bringing the nose to the chest) or they can't halt in balance. If a halt is no longer relevant for Grand Prix, are high performance riders than still riding for lightness, harmony and submission? Will the Grand Prix now definitely become a platform for trick riding?

The public complains it can not understand (the judging of) dressage, but what is going to happen if they shorten the Grand Prix test? Horses will have to execute very demanding movements in an even shorter time frame. They have to be spot on in an extreme way with the parts that prove submission deleted from the test. Furthermore, is the length of the Grand Prix even really the issue that makes dressage unpopular according to some?

But if length truly is the stumbling block, than there are better ways to shorten the Grand Prix. There are three piaffe-passage sections in a Grand Prix test and since 2014 the piaffe has been given a coefficient of 2 to put additional weight and importance on that movement! Why not remove at least one piaffe-passage section from the test, including one of three (!) trot extensions. Veterinarians keep stressing how damaging an extended trot is for the horse's tendons. If the Grand Prix test has to be shortened to appease the minds of dressage community members lusting for media attention, getting rid of the second trot extension and first piaffe-passage section seems a much better suggestion. That will generate plenty of spare seconds without touching the movements that actually require harmony instead of leg flash!