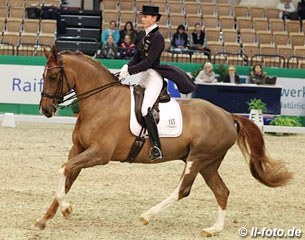 German Kathleen Keller and her 1.83m standing 10-year old Desperados (by Danone x Werther) swept the small tour classes and booked a 'giant' win at the 2015 CDI-W Neumunster on 13 - 15 February 2015. The pair won the Prix St Georges with 73.342% and the Intermediaire I with 74.132%. Keller can't contain her excitement and is ready to start Grand Prix this year.

“He felt great and it was such a great success because it was his first international show,” the 24-year old Keller told Eurodressage. "He is now on the way to Grand Prix after he participated three times in the finals of the Nürnberger Burgpokal (Developing PSG Championship)."

Kathleen is looking forward to the 2015 outdoor season and is very curious as to how it will be with Desperados.

“I will continue the training with my parents Manuela and Dolf-Dietram Keller. We have our own stable in Luhmühlen and last year I finished my psychology and management studies. I am working now in our stable as a professional rider," she explained.

Although the chestnut powerhouse Desperados is "so big," Kathleen says he is really nice to ride and a quick learner who is always very motivated.

“I am very glad that I can ride such a horse, and because my parents bred him themselves he grew up on our farm and I have been riding him for five years now," she said.

With a few different horses in training, including Manuel Tavares' Brazilian WEG team horse Vinheste,  Kathleen hopes to compete them in different classes throughout 2015.

The German youngster has no problems combining work and her family life at home. She says the conditions are just perfect to train with her parents. “We really get along; they are amazing trainers," she added.