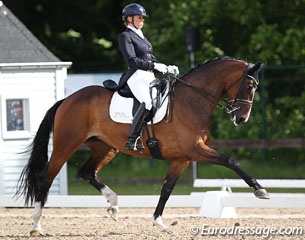 Sunrise is bred by Albert Klöntrup and is by Sion out of As You Like It (by Aarking xx x Ramiro x Wendelin).

She was first competed in show jumping in 2010 by Tim Rieskamp-Goedeking and as of 2011 co-owner Wilhelm Zegers showed her in dressage horse tests from A to M-level.

In 2014 the dark bay mare made her international break through under Dutch Kebie van der Heijden. The duo showed at small tour level at the CDI's in Kapellen, Perl and Zandhoven and took out the Prix St Georges' victory in Zandhoven last September.

The mare was last registered in ownership of Wilhelm Zegers and Aciano investments (Stable Korenbloem) before selling to the Belgian based American Fairchild family.

Alexa Fairchild has been a fixture on the Belgian team from ponies to young riders level. Aboard the 15-year old Dutch bred Tum Tum (by Matterhorn x Indoctro) she has made the transition to the Under 25 Grand Prix division. Fairchild is a VLP Talent Team member and is trained by Virginie Deltour.

"We are very, very excited about Sunrise," said Fairchild. "She shows a lot of potential. She is schooling the Grand Prix movements, but we might aim her at young riders first. All needs to be seen as the season progresses. The objective for the long term is to get her in the Grand Prix."