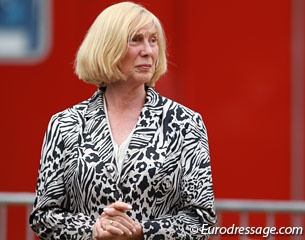 Our Guest Columnist this week is retired I-judge Angelika Frömming (GER). Eurodressage's Silke Rottermann described Frömming as "one of these rare personalities who doesn't shy away from clear words and from taking unpopular positions for the welfare of the sport and the horses involved. Rather in the background than in the big spotlights where some of her judging colleagues like to position themselves, Frömming has influenced dressage in many ways over the past five decades."

Currently there are several discussions in the dressage community which all concern one topic: How to make dressage more popular with the crowds and consequently with the media and sponsors. One hotly discussed approach is to shorten the Grand Prix programme at championships and this proposal has caused a considerable outcry as it seems to threaten the sport's classical basis. In all that discussions I miss one aspect: the "open scoring."

The spectators like to be informed in detail and within seconds. I could notice this again on the current TV coverage of the skiing, might it be downhill skiing or biathlon. The spectators often do not predominantly look at the style of skiing or fighting, but much more they look for split-timing or interim results.

In the past we had open scoring but unfortunately only the running score remained. Spectators often were very interested in the single results of the judges for every movement. Occasionally there was an uproar, a moaning or laughing in the air, but the audience was rooted for the rider. Who was interested in judging had the opportunity to learn a lot and could see which marks were awarded for a just seen movement.

Only some officials had problems with this kind of open scoring. The usual argument had been that the spectators then would be much more interested in the marks and difference of marks than in the rides itself in the arena. In my opinion this is a not very strong argument. The question nowadays is how can we increase the interest in the sport. And spectators do have very different preferences: Who only wants to see the rides, could still do that despite an open scoring. This will not disturb them at all. And who is happy with the "Game of Marks", should be delighted with this way. And who's able could connect both, enjoying the rides and trying to understand the single marks of the judges, judging from different angles along the arena.

In my opinion the open scoring like we had it, for example with audible success at the WEG 2006 at Aachen, could be an answer how to increase the public interest and make the sport more thrilling without touching its origins. Moreover: It cannot be denied that the open scoring also had a positive effect on judging.

Finally one word on a possible shortening of the Grand Prix for championships: Almost 100 horses at the WEG last year in Caen had been a hard nut to crack, no doubt. But if the Grand Prix would be shortened it would still be almost 100 horses! The FEI is of course in a dilemma: the more countries are taking part, the securer the position to remain in the Olympic programme seems to be. But, and this is a very important question for me: Does only the shortening of the Grand Prix improve the general situation? In my opinion not only the open scoring would be an option to increase the popularity of dressage without touching too much the sport's classical origins. I see some great potential in commentating and explaining the decision of the judges to the spectators. We all know that in show-jumping it is pretty simple: To win you have to be faultless and with the fastest time. In dressage we only have the end-result and for many spectators an explanation is lacking why somebody won.

This means that we should think if a skilled commentating of the rides should be offered on this level. Quite rightly it is often pointed out that many spectators are not really able to understand dressage--so if we aim to win spectators for our sport; we should also start drawing on this.

In Germany we have such kind of comments by respected I-judges after each ride in the classes of Nuernberger Burgpokal and Louisdor-Cup and it is well appreciated by the crowds. However, if one would consider skilled commentating an option, the next question is in which way this could be done.

To add a comment after each ride cannot be a solution when we are talking about shortening the Grand Prix. To comment during each ride doesn't seem to be a good answer either as some expert spectators might feel disturbed and moreover it is impossible during a freestyle. To me the idea of an obligatory offer at international shows to give expert comments to each ride is only useful if we can do it with headphones. The big Aachen show offers this option now for several years and the acceptance of the spectators shows the potential of it. Of course I am aware that the realisation would be an expensive thing to do, but I am sure that like with other electronical devices also such headphones could become more affordable for organizers.

To make our fascinating sport more popular is an honourable and necessary aim. But it cannot go so far that we threaten the classical basis and principle of this discipline by shortening tests and cutting out movements that prove the supplness, submission, confidence and obedience of the horse or by changing the tests in a way that mainly spectacular elements remain. I am convinced that there are practical ways to fulfill the aim without endangering the aims of classical dressage sport.

- by Angelika Frömming for Eurodressage